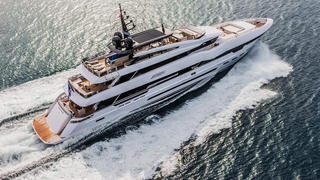 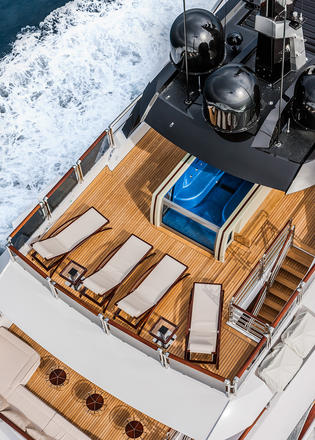 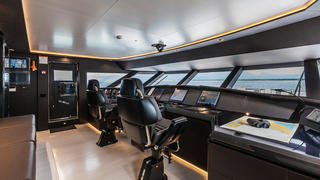 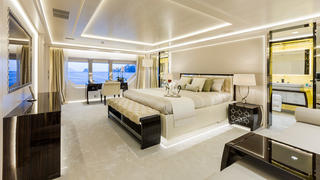 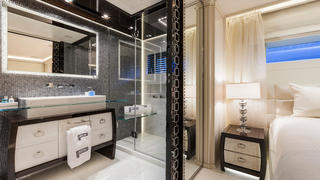 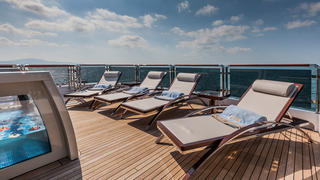 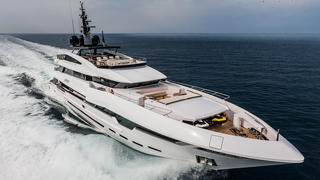 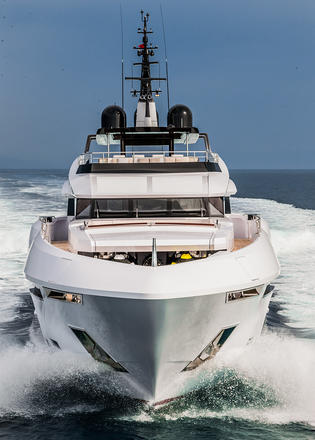 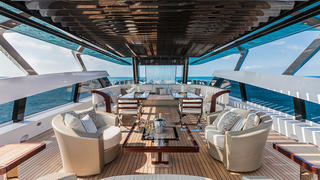 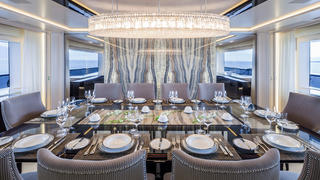 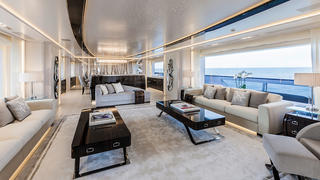 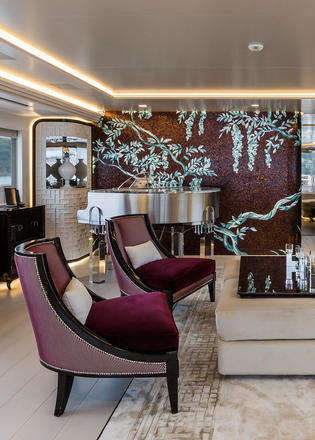 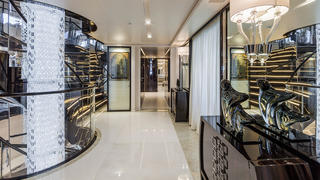 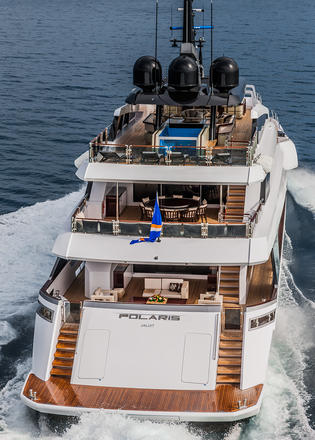 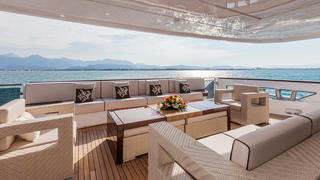 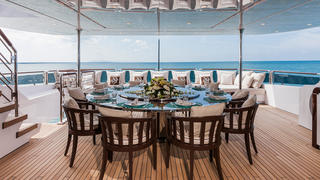 Polaris: The Rossinavi superyacht with plenty of wow factor

First published in The Superyachts Vol. 29

Polaris is the second in the powerful Prince Shark superyacht series from the Italian builder Rossinavi. On the outside, she closely resembles her predecessor, Param Jamuna IV, but her owner pushed the designers, architects and family-owned shipyard to achieve further refinements, particularly in terms of performance.

The Prince Shark concept was developed by Team for Design with naval architecture by Arrabito Naval Architects. Designer Enrico Gobbi’s dynamic and clean lines give the aluminium, semi-displacement Polaris a sporty and aggressive look.

Details recall commercial or military ships, such as the reversed pilothouse glass installed at a 45-degree angle, a style line echoed in port and starboard fashion plates and the supports for the fixed awning on Polaris’ sundeck.

Another goal for the series was to create well-proportioned volume that guarantees comfortable and spacious interiors within a superstructure sized to remain coherent with Polaris’ sleekness and especially to fit below the 500GT threshold.

Strong horizontal elements and stretched windows make Polaris appear longer than she really is but this streamlined look does not come at the expense of views. The extensive use of notches in the coamings in front of key windows, which reach nearly full height in the saloon and the owner’s suite, guarantee panoramic vistas and plenty of light on the main deck.

“All elements of this project have been carefully studied to obtain the optimal proportions that compose the yacht’s architecture,” says Gobbi. Polaris, even with three decks and a flying bridge, maintains harmonious volume, ensuring an elegant line, which is not so common in yachts of such volume, he adds. In recognition of her excellence, the yacht won the 2015 World Superyacht Awards class for 40-metre or above semi-displacement or planing three-deck motor yachts.

One of her best features is the large lounging and sunbathing area at the centre of the foredeck, a position that guarantees good views while Polaris is underway and privacy at anchor. The most impressive exterior area, however, is the flying bridge deck. An arch that incorporates large smoked-glass windows shields passengers from the wind and sun but allows them to enjoy optimal views from more than nine metres above the water.

The aft section of Polaris’ flying bridge is designed around a 3.6-metre superyacht spa pool. A recirculating waterfall from the louvred hardtop cascades down a glass panel separating the pool from the dining area, so that guests can enjoy the sound of water even if the sea, from this high vantage point, is too distant to be heard. The whole deck boasts details in crisp teak and stainless steel, while the pool bottom is lined with Murano glass tiles, a detail that reveals something about the designer’s proud Venetian origins.

The interior of Polaris features a compromise of contemporary influences with a dash of eclecticism stemming from the personal taste of the owner, a young entrepreneur. Precious materials convey timeless elegance and opulence. Varnished ebony, used primarily for the custom-made furniture, and other dark materials are found in combination with a light ivory-coloured maple and high-quality leathers in off-white.

The choice of materials creates a chiaroscuro enriched with marbles that give Polaris her distinct personality. Embossed and polished stainless-steel details used on the furniture and the walls, together with some deep colours, add a touch of modernity.

“We have worked intensely on the details with the entire team to make a welcoming and warm atmosphere [that is] luxurious and distinctive,” says Gobbi. “The fitting out of all areas plays an important role in giving Polaris her eclectic and exclusive style. Cottons, silks and velvets hail from Armani Casa’s textile collection. Decorative objects in Murano glass have been placed in prominent areas, where they are highlighted by means of a clever lighting system.

“Last but not least, a selection of fine paintings, including two rare works from the 18th century, confer importance and prestige on Polaris’ lobby area, ensuring a sophisticated welcome to the guests stepping on board.”

The main hallway offers an impressive welcome and guaranteed “wow”. Here, Gobbi left Venice to embrace the rigorous geometry of Swarovski’s Austrian glass artisans. A chandelier made of thousands of Swarovski crystals, three decks high, fills the space within Polaris’ superyacht staircase and projects awesome flashes of light onto the surrounding walls.

All these beautiful spaces and materials made the work of the naval architects a little more challenging. Giuseppe Arrabito, owner of Arrabito Naval Architects, explains what makes Polaris so complex. The owner wanted the most volume for this length, while remaining under the 500GT threshold.

Next, the full-beam decks, the enormous superyacht sundeck, the pool and the decor – including over nine tonnes of stone – added substantial weight, as did acoustic insulation, an advanced system of floating floors and the most complete array of state-of-the-art equipment and electronic entertainment systems available. Yet Polaris’ owner did not want to compromise on performance.

“[The owner] requested that we reach a maximum speed of 23 knots and a cruising speed of 16 to 17 knots and, weight notwithstanding, obtain optimum fuel consumption for long-range crossings,” says Arrabito. “This weight, much of it at the top, made it more difficult to comply with the performance and, above all, Polaris’ stability requirements, and mandated a very accurate and refined study of the hull and lines.”

He is justifiably proud that Polaris floated exactly on her lines at launch and that no fixed ballast was required to obtain correct load-line trim. Moreover, the yacht, with her two MTU 12V 4000 M93L engines creating 3,460 horsepower at 2,100rpm, exceeded requirements and reached a maximum speed of 24.3 knots during sea trials, which were undertaken in less than ideal conditions.

Param Jamuna IV topped out at 23 knots. The surveyor’s report noted that the tests were carried out in Force 4 sea and wind conditions with gusts up to 30 knots. The hull form also met the requirement of low fuel consumption. Fuel burn is only 90 litres per hour in total at a speed of nine to nine-and-a-half knots, giving a range of more than 4,800 nautical miles at this “transfer speed”. At the cruising speed of 17 knots, consumption is around 580 litres per hour, whereas pushing to full speed consumes around 1,300 litres per hour.

There are a few differences between the first and second Prince Shark that account for different performance results. In contrast to Hull No. 1, for instance, Polaris does not have a superyacht elevator and has one less cabin in the forepeak area. At full throttle heading into the sea, the surveyor noted the vessel “is particularly dry, showing a very good performance of the spray rail”.

Federico Rossi, COO of Rossinavi, says: “With Polaris, we have reached even better performance than on Param Jamuna IV by adopting various weight-saving measures.” He recounts with pleasure the sea trials conducted with RINA. “The yacht, going at 24 knots, had to turn at full radius and remain within a set heel range. We all grabbed on, expecting a big heel, and instead the incline was limited to two-and-a-half degrees.

“This performance is due to the hull form, which is straight at the bow and then widens quickly to provide lift and stability. As to the comfort level, Polaris has obtained the highest rating available in RINA’s comfort class, thanks to the yard’s vibration and noise-dampening techniques, with decibel numbers comparable to those of a displacement yacht.”

The next chapter will come with the third Prince Shark iteration, which is already under construction in a large waterfront shed that the Rossi family owns in an industrial area near Pisa, a few miles from Rossinavi’s Viareggio home base. No. 3 is being built in steel and is a full-displacement hull.

While the three Rossi brothers who founded this company began building yachts under their own name only a few years ago, they have worked with steel and aluminium materials since the 1970s. They constructed hulls and parts for other well-known shipyards in the Viareggio area of Italy, and later launched a series of passenger ferries.

Their office in Viareggio, which now employs two generations of Rossis, includes an engineering department that designs custom parts such as hatches, doors, hinges and accessories. One of the brothers, Paride, heads that department, while his nephew Federico, the COO, who also has an eye for design, has been instrumental in building a portfolio of enticing projects, including the Bahamas series which he created with Axis Design to appeal specifically to the US market.

“We are very pleased with the work done, including at Rossinavi and in particular with our relationship with [CEO] Claudio Rossi, who has been a reliable partner, passionate about his work,” says Polaris’ owner, embarking on his first cruise.

“Polaris has met all my expectations, be it in terms of exterior or interior design, and exceeded them in terms of performance. And she was delivered on time!”

Ketos 48m - Rossinavi's first production yacht is anything but standard