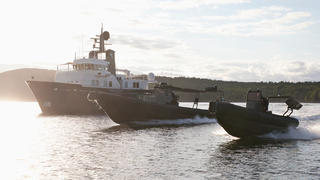 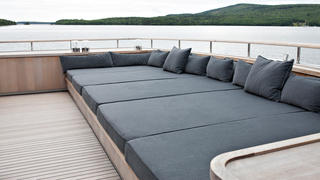 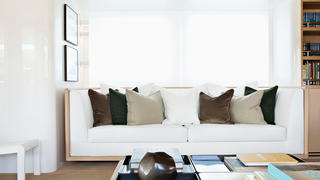 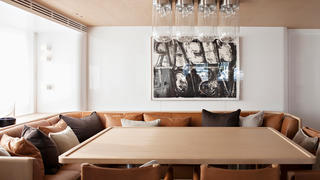 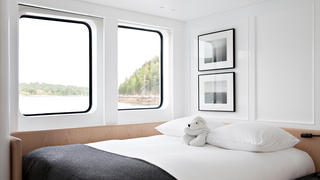 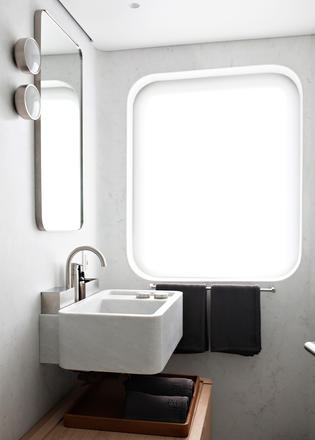 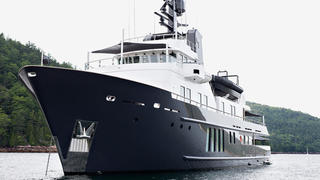 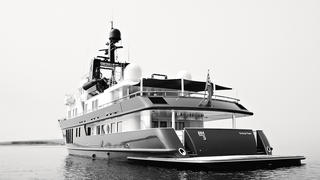 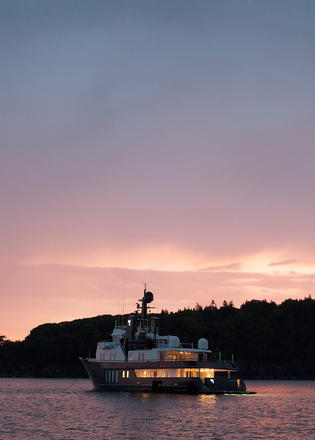 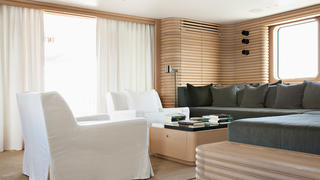 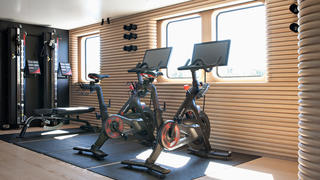 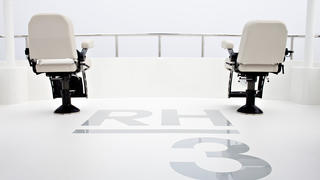 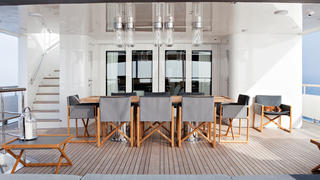 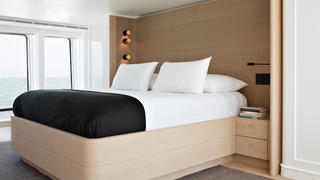 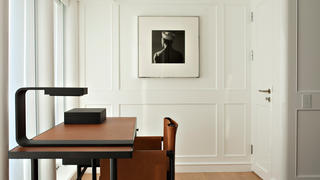 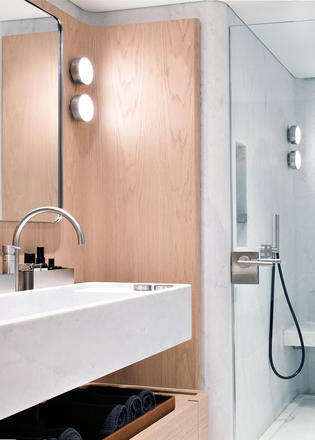 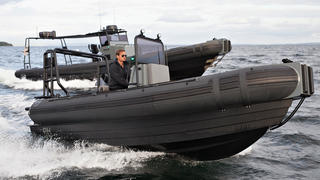 One inspired and energetic owner has built a stunning extension to his family home — a 40m explorer fit for a circumnavigation of a lifetime...

Some people wait years for the right boat to come along; for the owner of RH3 it was an entire decade. “I saw her somewhere in the South of France in about 2004,” the 52 year old recalls, “and I kept following her ever since. I’ve always followed explorers. I like their kind of ‘tug’ look.”

Known then as Private Lives, the yacht did once appear on the brokerage market but was de-listed before the Belgian entrepreneur could pounce. Resigned to never owning the object of his desire, he turned his mind to a new build. Then one day in 2013 “a broker friend called and said Private Lives was for sale again. It took me two days to decide. I just went for it.”

The timing was perfect. The owner has two young sons with his partner and was ready to step away from his business to concentrate on seeing the world. “As a kid growing up in Antwerp I used to see all these commercial ships come and go and I always had this fantasy of going places.”

The plan is to cross to the Med for summer 2017, before launching on a circumnavigation. “I’m a very curious person, so I just want to discover these places that adventurous people talk about, like the Galápagos,” says the committed conservationist. “I also want to raise awareness in my kids, and remind myself what we are fighting for.”

The adventure might have started earlier but the year-long refit he planned on purchase snowballed into a two-and-a-half-year rebuild at Rybovich in Florida. “We literally spent the equivalent of a new boat — I would even argue that you could build a yacht for less than what we put into RH3. But once you get started, you don’t stop.”

He called in the original designer, Vripack, to work on the project, pairing the hugely experienced studio with an interior designer working on his very first superyacht, Vincent Van Duysen. “Van Duysen did all my homes,” the owner says. “He’s used the same woods, the same tones. If you had been in our home and walked on to RH3, you’d say they felt the same.

“I tried to make it luxurious but not like you are uncomfortable. The sofas in the living room are waterproof, so you can literally come in from a swim and lie on there and nobody is going to get mad at you. It’s a different way of looking at yachting.”

The resulting finish is super-clean, but never clinical. “The new design creates comfortable and welcoming interiors, perfect for shelter for all expeditions and adventures at sea,” says Van Duysen. “Spaces to be lived in and used in all seasons, in all locations worldwide.”

The palette shows real restraint, kept to a handful of shades and materials for a consistent mood throughout. It’s about producing a “timeless” atmosphere, says Van Duysen, the idea of “creating a home”. Bleached and brushed European oak is used on the walls and ceilings in the saloons, and white lacquered panelling in RH3’s cabins.

Carrara marble and brushed stainless steel feature in the bathrooms, while beds, chairs and sofas are covered in natural leather, cotton rope fabric and Belgian linen. The ribbed panelling in RH3's upper saloon is a highlight.

“We wanted to create a unique atmosphere in the sky lounge, as this space has the double function of a lounge and superyacht gym. It’s comfortable and inviting, while at the same time masculine and sporty,” says the designer. “The idea was to reinterpret the ribbed expression of rope cladding, but in a solid material.”

Equally distinct is the lighting throughout RH3, especially above the interior and exterior dining spaces, where large glass lanterns designed by Lebanese firm PSLab hang over the tables. “We wanted to light up the spaces in a very warm way,” explains Van Duysen.

The owner worked closely with his favoured designer in rearranging the interior layout of RH3. Gone are a pair of VIPs to the rear of the upper deck and in their place a comfortable lounge and indoor exercise area. The indoor dining table on the main deck has been sacrificed for a more informal dinette, and a bunked kids’ cabin and modest double were added on the main and upper decks, respectively.

These are just the headlines among a host of smaller modifications to a yacht that was originally launched in 2003 at RMK Marine in Turkey. She was commissioned by an American owner who saw her charter potential and is the sistership to a yacht called Jasmin. Vripack designed both and was the obvious collaborator for such an extensive rebuild.

“If you do a refit of a 500GT boat and want to add a lot of functionality, that’s going to have a big effect on how the boat performs,” says Vripack designer Joost Mertens. “The owner had a lot of demands and we had to guide that. So if he wanted to add weight in an area of the boat, we explained that the consequences will be this and that.

“For instance, he wanted to add big heavy tenders on the top deck, and the price he paid for that was a lightweight carbon mast.” The biggest add-ons were the modified transom and new 2.8 metre bathing platform, a large carbon fibre extension to the upper deck and an extra lounging space forward of the bridge. To increase buoyancy, the underwater body was extended aft.

RH3 was a proven performer before the changes, with at least a dozen Atlantic crossings under her belt, and the additions don’t seem to have upset this pedigree. “The seakeeping of the vessel is very good,” the captain, David Clayman, reports. “For her size, she is stout and deep. She is sturdy and I would rate her seakeeping abilities as well above average for her class.”

He sensibly avoids taking the yacht out when conditions aren’t favourable, but says he has encountered three metre seas while at the helm, coming at 12 second intervals, and that RH3 pushed though it capably, even with the zero-speed Naiads switched off. It was just this kind of no-nonsense, go-anywhere potential that appealed to the owner.

“In general, most yachts are about sitting there and doing nothing,” he says. “We want to go places, do things. It’s all about being real and I think an explorer gives something real to the ocean.”

A highly individual yacht, RH3 gives you all sorts of clues about the owner’s lifestyle within minutes of stepping on board. The upper deck saloon is a hybrid space — part playroom and workout space. Exercise bikes sit facing the big picture windows alongside a pair of Keiser performance trainers. There’s also an outside exercise space on the observation deck, above the wheelhouse.

“It’s all about being active, getting up early, doing a workout, going for a swim and then hiking or biking. We have a special bike room, to keep our mountain bikes at the right temperature. It’s all just an extension of our lifestyle,” the owner says.

It’s not all unalloyed good health — the owner is fond of sitting in one of the twin chairs on the observation deck and taking in the view with a cigar.

The toys on board rival any other 40 metre on the water — and even much larger boats. A pair of MR650 RIBs built by Dutch firm Madera sit behind the wheelhouse on the boat deck, and RH3 also tows a much larger 15 metre MR1300. All the support vessels are dressed in black.

“It is like James Bond selecting items from Q,” says Mertens. “Everything needed to be black, needed to be sturdy, needed to be rough, masculine, waterproof. It needed to reflect his sporting lifestyle — going into the ocean and doing crazy stuff, but all in safety.”

The larger RIB is capable of 45 knots and suitable for long day trips, with a day head, sunbeds and space for SeaBobs, bikes and kayaks. Second officer Bevin de Lange says he has never had as much attention as when pulling up to the dock in the RIB. “Everyone wants to know if we are FBI or CIA.”

RH3 has already done some modest exploring, cruising up to Nova Scotia last summer, after which came another yard period and Christmas in the Caribbean. Cuba is also on the list, just before the crossing over to Europe. Crucially, the family has fully bought into the boat and its mission.

“I didn’t know how my partner or the kids would react to RH3, but they were totally blown away by the boat. The kids felt like they were in an extension of their home, so they jumped on the sofas and so on and immediately felt at home. It has exceeded expectations. Like me, the rest of my family is extremely curious and we have this tremendous amount of energy. Some people just want to go on holiday and sleep, but that’s not us.”

The still-evolving plan is to head off in autumn 2017 for the circumnavigation, flying in and out where necessary. As for the precise route? “We’re just going to play it by ear.” After waiting a decade for his boat, this is one owner who’s not going to rush it.

First published in the February 2017 edition of Boat International

Ulysses: Inside the toughest toybox on the water