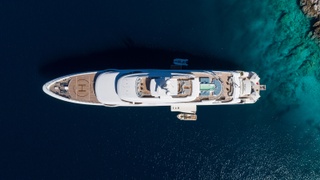 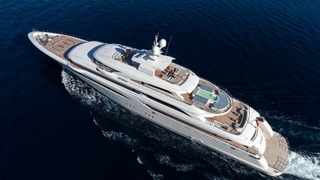 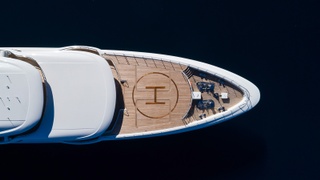 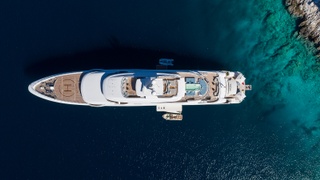 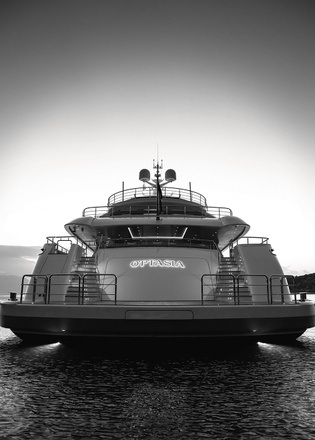 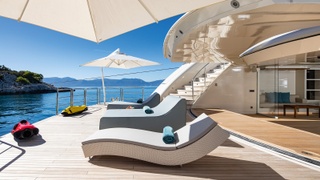 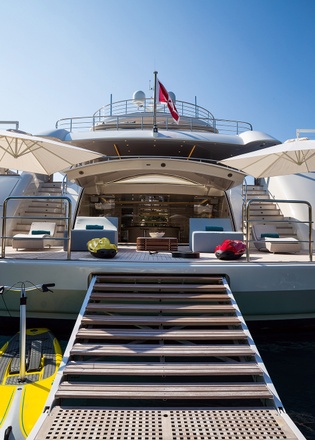 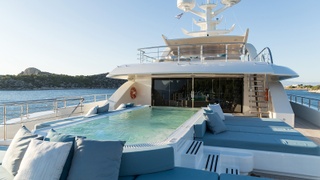 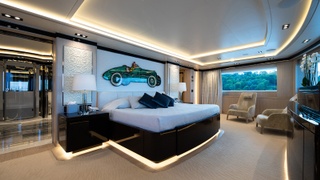 Silence is golden: On board the 85-metre Golden Yachts flagship O’Ptasia

“She was booked for charter before even leaving the shed, just based off the renderings,” says Paris Dragnis of the new 85-metre Golden Yachts flagship O’Ptasia.

Standing on the quay at the yacht’s home marina in Athens, the chairman and founder of Golden Yachts gazes admiringly up at his new yacht. At 2,350GT, she is the largest boat to emerge from the Greek yard. And she sets a new standard among her Golden Yachts siblings for amenities and technical innovations to maximise guest comfort on board.

Golden Yachts’ business model is distinct from most yards’. Rather than building a yacht with a client in mind, or even on speculation hoping to lure the right owner, new yachts go directly into the charter market, managed by Golden Yachts’ sister company, the brokerage house Atalanta Golden Yachts. These spend at least a few years chartering before being put up for sale, with Dragnis also taking this time to use the boat himself – as a means to both enjoy his creation and gain insights on improvements for the following iterations.

In this sense, Dragnis very much wears the hat of owner during the build process, dreaming up the brief and working hand-in-hand with Italian designer Giorgio Vafiadis of Studio Vafiadis. Their first Golden Yachts project was 42-metre O’Pari, launched in 1997 by Intermarine but refitted by the nascent Greek yard in 2006. Studio Vafiadis masterminded the interior design of the refit.

“Yachting was my hobby and then it became my business,” says Dragnis. “And I still love it.” Before venturing into yacht building, his business was cargo ships and tankers. And in a former life, in his early 20s, Dragnis worked on boats himself. His business card still brandishes the title “Captain” and the crew refer to him as such when he’s on board. These days, though, he is quite content to leave the helm to O’Ptasia’s actual skipper, Nikos Demertzis, who says that the full-displacement yacht handles exceptionally well in rough seas.

From seafarer to shipping magnate to yacht owner, this varied maritime history has helped inform the construction process of Golden Yachts. The shipping background in particular has surely helped the engineering advancements found on O’Ptasia. Guest comfort was paramount to the brief, and as such additional sound dampening was required.

Vafiadis, along with his son Stefano, styled O’Ptasia’s interior and exterior as well as configuring the layout

“My wish is to build a boat that when it’s running you hear nothing at all,” Dragnis says. The precise goal was to improve noise insulation by 35 per cent compared with O’Ptasia’s predecessor, O’Pari 3. “I like the quietness of the upper saloon,” says Vafiadis, to this point.

Vafiadis, along with his son Stefano, styled O’Ptasia’s interior and exterior as well as configuring the layout. He has penned 11 out of Golden Yachts’ 13-strong fleet, creating a familial inheritance of flowing looks, soft lines and a style that endures. Balance, fluidity and light are all Vafiadis keywords.

“Looking at the profile, you can recognise a certain fluidity, like water moving in slow motion and then shaping well-balanced volumes,” he says. “It’s a continuation of a style in the Golden Yachts family. When you make a successful design for a brand, it’s normal to maintain such design concepts. We designed all of the Golden Yachts new builds having that same idea in mind.” In order to create an elegant exterior on a larger scale with O’Ptasia, Vafiadis played with the contrast between volumes and recesses, “by pulling the volumes out in opposition to the recesses absorbed by the dark”.

The tastes of Dragnis and Vafiadis are balanced inside. “I like light colours and Giorgio likes dark woods, so it’s always a matter of finding a compromise,” Dragnis says. Fittingly, the interior has a blend of dark woods paired with a light colour palette that is intended to evoke a sense of calm. There is a range of woods, from a porous lati to glossy ebony. “The inspiration for the interior was quiet, calm and relaxing,” says Vafiadis. “We kept the surfaces clean, and there isn’t a lot of clutter or accessories.”

The interior decor is modern, with clean, crisp lines and eye-catching details. Ebony cabinetry is inlaid with stainless-steel details. A rippled line in the cabinets breaks up the expanse of joinery in the saloon, drawing the eyes up and out to views beyond the picture-box windows. The main saloon is a grand space, one large open-plan room with two separate seating areas containing white leather sofas, black coffee tables and glass lamps. A dining area is set at the forward end of the saloon, and the ebony dining table is centred with backlit, honey-toned onyx.

Air-conditioning units, supplied by Dometic, are hidden in columns, and they are whisper-quiet, with air dispersed through the shelved ceilings. This not only hides the potential eyesore of vents but also creates dramatic height, especially in the main saloon – and the next yacht in build is slated to have ceilings that are 20 centimetres higher still. The upper deck saloon is a more casual place for lounging or watching films, with low-slung grey sofas, a bar and games table.

The guest cabins feature eucalyptus walls and grey joinery. The space is allocated well in the suites, and most cabins have walk-in wardrobes. Bathrooms have a Greek flavour: some are decorated in Pentelikon marble, which was used in the construction of the Parthenon in Athens (it is ideal for en suites as it doesn’t absorb water); other bathrooms feature a green marble found on the Aegean island of Tinos.

The plentiful cabins – she can accommodate up to 22 people – are numbered rather than named, which gives a bit of an impersonal impression. But this could be easily remedied by a new owner. Otherwise, Vafiadis manages to keep a yacht that’s built for holidaying from feeling like a cruise ship. “The key is to use warm colours and create interesting and dynamic spaces with a logical flow. It’s very important for guests to easily move around the yacht,” he says. “Merging interior and exterior spaces wherever possible also elevates the feeling of the yacht.” There are three entry points for guests, whether arriving by tender or helicopter on the touch-and-go helipad, and the general arrangement is well planned for ease of guest and crew flow.

The art on board O’Ptasia is a feast for the eyes. Pop art, mosaics and textured pieces that tempt you to touch them adorn the hallways and guest cabins, adding heaps of personality. The pièce de résistance is the light installation in the lift, a glowing purple triangle that beckons you into the dimly lit space and makes riding even one floor an experience.

There is a second lift on board that’s hidden from view, dedicated for crew use. Similarly, the magnificent staircase – a set of glowing onyx steps in a jet-black stairwell – is backed by a crew staircase on the opposite side. While the two staircases allow crew to move about with ease and without being seen by guests, this is intended for charter clients rather than for Dragnis himself. “The crew is like family – I like to see them move up in the ranks; it’s the shipping mentality in me,” he says.

Charter guests’ preferences inform many of the design decisions. For example, a twin cabin being placed next to the master suite helps those guests who want to have their children or a chosen assistant close at hand. “I learned from the chartering side of the business that people want a big swim platform and beach clubs with all the amenities,” says Dragnis. Here, O’Ptasia does not disappoint. The massive beach club boasts a curved bar, hammam, massage room, sauna and plenty of space for soaking up the sun before sliding into the water. For those who prefer freshwater, there is a pool set aft on the bridge deck. A dedicated gym also enjoys pride of place – and outstanding views – on this deck. Guests could work up a sweat before slipping into the pool moments later.

When it comes to building boats, Greeks are better known for their shipbuilding than their yacht-building. Greece doesn’t have a proven reputation for quality in this realm, something of which Dragnis is aware, and he is seeking to change that. Most Golden Yachts suppliers hail from afar, he says. The interiors are built in Italy, the lift is by a German company, electronics are from America. But he likes to employ Greek workers in the build, up to 400 when running at full capacity. “I want to support my own country and people,” says Dragnis. The yard runs two shifts so they can build yachts quickly. There is also a refit and repair division. This combination of global yachtbuilding expertise and quick-moving Greek labour allows the yard to keep costs down. “Our price is competitive, but we are not low-budget,” he says.

“If you’re not in a rush, you can sell it well to the right people,” says Dragnis. “We had three serious buyers for O’Ptasia before she was launched, but we already had charter bookings lined up. Plus, I like to use the new boat myself for at least a year – or until the next one is launched.” The first charter clients who were able to enjoy O’Ptasia just after she was delivered in June 2018 have already reported back their delight, commenting on the beach club and styling. But the best feedback, Dragnis said, concerned comfort levels. “Some customers said that when they were on board, it was so quiet they didn’t even realise she was moving at all.”

All photography courtesy of Breed Media