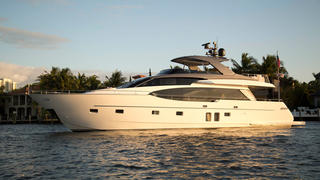 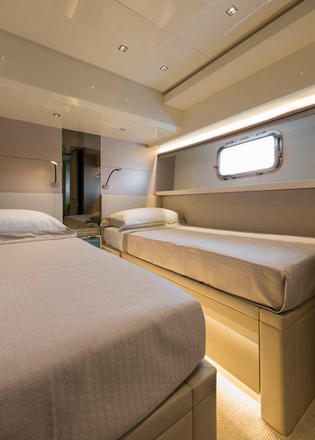 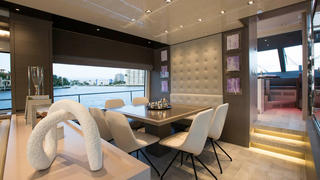 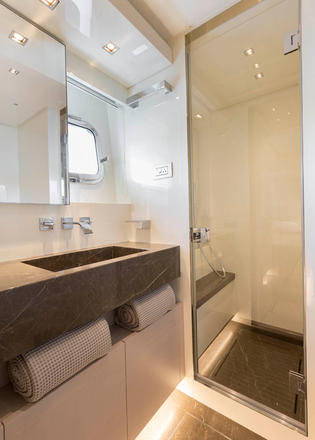 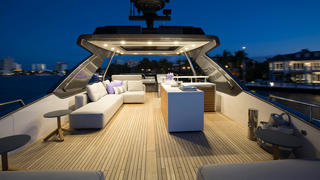 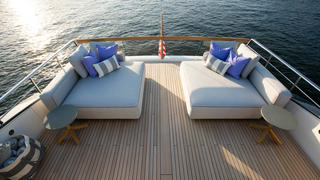 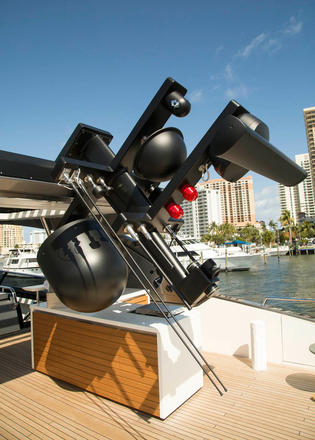 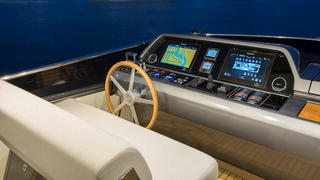 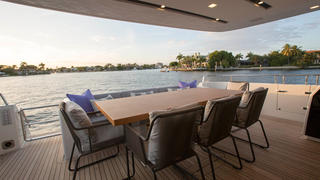 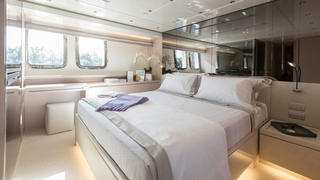 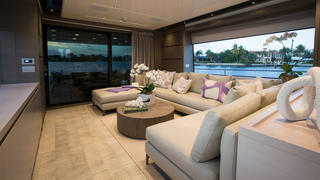 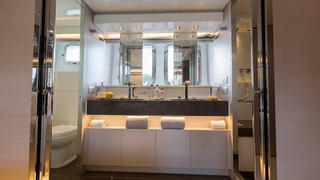 Sanlorenzo Americas followed the launch of the smallest yacht in Sanlorenzo’s fibreglass range, designed in collaboration with Officina Italiana Design and unveiled in 2016, with its own version of the appealing SL78. The 24.67 metre Sanlorenzo SL78 Sag Harbor Edition features a number of system upgrades and an interior design by Sanlorenzo’s go-to designer in the Americas, Marty Lowe.

This version of the Sanlorenzo SL78 has been rethought with an eye for the likes and desires of the American market. This includes a different take on interior design, which is geared towards boaters with a more casual approach to life on board, redundant systems such as twin generators, and bigger chillers to deal with tropical temperatures.

Why Sag Harbor? The stylish matte black mast provides the explanation. The whole structure folds down at the push of a button in less than minute, tucking neatly underneath the arch. With the dome out the way, the Sanlorenzo SL78 can clear most bridges and more specifically the fixed bridge in Sag Harbor, New York, which has a 6.4 metre clearance at high tide. With its mast folded, the SL78’s air draught is just 6.1 metres, enough then to motor right in, alongside lower profile express cruisers.

A couple of experienced boaters can easily handle what Sanlorenzo has described as the entry-level model in its planing range. However, it has a small but well-thought-out crew cabin with two bunk beds and separate head with shower, accessed from the country-style galley. The well-equipped and attractive galley includes a comfortable C-shaped banquette around a good size table, which caters to crew and guests for a casual meal.

The helm console, located on the portside, is compact with everything close at hand and a single screen. A door, behind the dayhead, provides ready access to the side deck for a quick exit.

On fair days, however, there is no doubt that the Sanlorenzo SL78 will be operated from the flybridge deck for optimal views and the pleasure of cruising in company of guests. A comfortable helm bench accommodates two and a built-in lounger is situated starboard of the helm station, adjacent to the sliding glass hatch that provides the only access from the main deck.

In order to maximize the flybridge’s surface, Sanlorenzo has omitted exterior stairs. The trade off is worthwhile with space for a nicely sized bar and grill area, a pair of snazzy Philippe Starck-designed bar stools, comfortable L-shape seating and plenty of leftover space still to prop up a few chaises in the sun. Since the Sanlorenzo SL78 has a tender garage that can house a 3.85 metre Williams jet tender, the entire flybridge is dedicated to relaxation. A nice detail is a flexible handheld shower, accommodated tightly in a beautifully finished stainless steel cylinder, to freshen up on hot days.

As on the Sanlorenzo SL86, the central section of the flybridge deck is sheltered beneath a hardtop fitted with a louvre system that can be oriented to let sunlight in or block it out at the touch of a button.

On a sea trial during a windy day with choppy seas, the Sanlorenzo SL78 proved comfortable, easily climbing to a top speed of 29 knots with its new generation MTU 12V2000 M96L engines reaching the top of their rpm range and delivering a fuel consumption of around 313 litres per hour each. Dialling back the speed to 24 knots lowered consumption to around 242 litres per engine, whereas at 21 knots, consumption drops to around 210 litres per engine per hour. The total fuel capacity on the Sanlorenzo SL78 is 5,300 litres, yielding a range of around 260 nautical miles cruising at just under 21 knots.

Most of the systems on board the SL78 Sag Harbor are electric, from the zero-speed fin stabilisers by Italian company CMC Marine — which are quiet and very effective in cruising or anchor mode — to the thruster and of course steering, which feels very comfortable.

Back inside the décor is modern, as most Sanlorenzo yachts tend to be, but comfortably so. Lowe, a yogi with an easygoing elegance, likes to balance the rectilinear feel of contemporary design with more free-flowing features.

Boating often is a family affair, she points out, and not only will there be children aboard, more often than not, people also like to take their dogs along as well. “I want life to be freer and easier. It’s a vacation on the water,” she says.

Lowe chose every item on board the Sanlorenzo SL78 Sag Harbor edition according to this philosophy, from door handles that won’t snag clothes to bedding with a luxurious thread count that can be laundered on board.

Flooring, furniture and finishes need to be beautiful and durable. Accordingly, Lowe worked with one of her preferred Italian suppliers to build and size a comfortable sofa that will survive wet bathing suits and paws. Although smaller than standard-issue sofas in the US, its dimensions are commodious and the proportions are perfect for the space, while the oak flooring has been sanded and stained in a way that keeps saw marks visible.

The saloon is all on the same level and encompasses a nice dining area with room for all eight guests, complementing the exterior option that is situated on the main deck aft.

Set in a wall of tempered glass framed with stainless steel, the staircase to the flybridge deck is a visually pleasing feature that does not interrupt the flow of light from large windows. The interior lighting, which is minimal in its treatment, is all LED from Italian company Artemide.

On the lower deck of the Sanlorenzo SL78 you will find three cabins. The master is aft — an attractive space that encompasses an en suite with a double vanity unit flanked by a toilet and good size shower with marble walls. Located on the portside, it is separated from the bedroom by sliding mirrored panels.

The colours are light, except for the rich earthy tones of the marble in the en suite, and stainless steel details amplify light and the sensation of space. “I am obsessed with light and fresh air,” Lowe says. “I never understood why you are out on a boat and all of a sudden you go inside this Moby Dick environment.” Not only are the portholes on the Sanlorenzo SL78 notably large, but they can be opened as well.

Completing the guest accommodation are two twin cabins amidships and a VIP forward and up a couple of steps, each with its own private en suite.

Lowe likes to incorporate the Japanese thinking of Wabi-sabi in her designs. The idea is that there is beauty in transience and imperfection. It’s obvious that she has not taken this idea too far on this very appealing and very complete American version of the Sanlorenzo SL78.

6 cold destinations you need to explore with the Sanlorenzo 460EXP