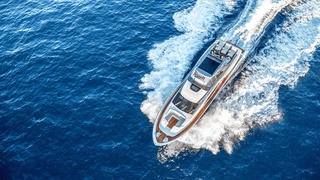 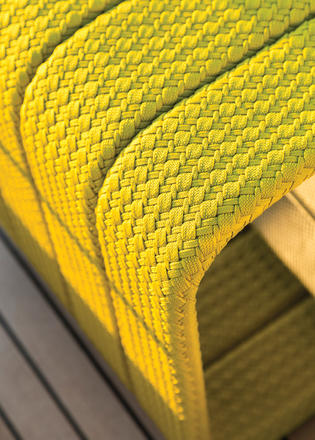 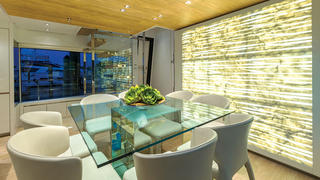 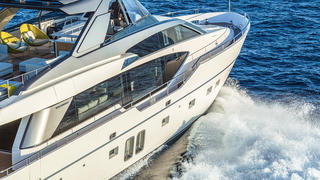 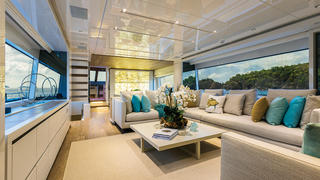 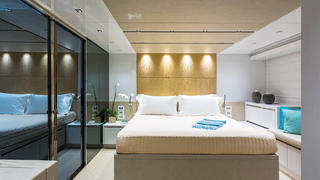 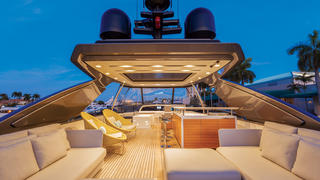 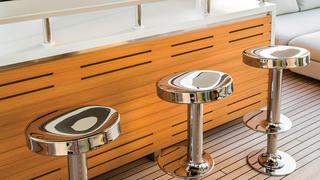 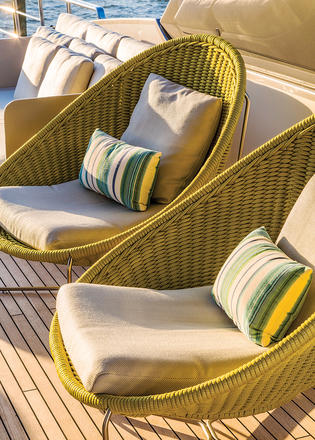 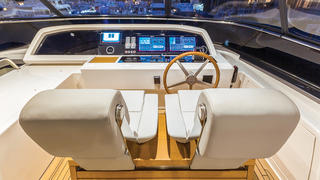 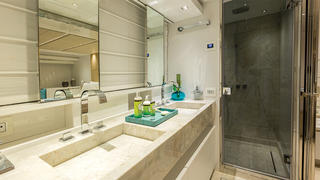 “When you drive to the shipyard, on one side is the sea and on the other side are whitecapped mountains,” says Fort Lauderdale yacht interior designer Marty Lowe of Sanlorenzo’s base in Ameglia, Italy. “But the mountains are not capped with snow — it’s Carrara marble.”

Inspired by the beautiful stone that has been harvested from quarries in Italy’s Carrara region since before Michelangelo’s time, Lowe designed a signature piece for Sanlorenzo Americas’ version of the SL86 created from large tiles of the traditional marble. It is carved with intricate patterns and mounted to the forward bulkhead in the main salon.

Backlit by new LED film technology, the marble glows where the stone is carved thin. “The LED film has consistent light and zero depth. It is a little like Saran Wrap,” Lowe says. She loves to take newcomers up to it, flip on the light switch and watch their awed reaction.

Sanlorenzo hired Officina Italiana Design to freshen up models in its shipyard’s fiberglass flybridge/planing yacht series up to 36 metres. Replacing the smaller SL82, the sleek 27 metre, 27-knot SL86 debuted in 2015 as Sanlorenzo’s new “entry-level” megayacht. Regardless, the SL86 has never seemed like an entry-level anything. Its exterior deck areas, guest accommodations and, particularly, its crew quarters are so large and well laid out that they look like they belong on a much bigger yacht.

Sanlorenzo Americas, the shipyard’s partner and distributor in the Americas, brought the SL86 to the US market last year, where it enjoyed instant success. A hull on display at Yachts Miami Beach in February 2016 sold during the show, and the Americas edition at the Fort Lauderdale International Boat Show in November was snapped up on the very first night.

George Jousma, president and CEO of Sanlorenzo Americas, says his business benefits from the builder’s restrained exterior styling. “It’s on more of the conservative side of the Italian concept... It is Italian styling; it’s stylish, but we have a very trademarked traditional style,” he says.

In addition, Jousma and his team, in collaboration with Lowe, develop a layout, design and technical package for each yacht model they import. “[The shipyard has] given me a lot of liberty with what we refer to as our ‘Americanisation package,’” he says. Yacht owners in the Americas are more laid-back in their yachting habits. “That doesn’t mean [the boat] shouldn’t be luxurious, but the lifestyle should be casual,” Lowe says.

The SL86, sold at the Fort Lauderdale boat show, evokes an airy beach house, with rough-textured white wood on the bulkheads and flooring made of whitewashed, distressed oak. “That came from so many people who are cruising with their dogs,” says Lowe.

“Light, light, light,” was her mantra. Lowered bulwarks maximise light coming in through the extra-large saloon windows. Instead of an enclosed superyacht staircase leading from the salon, Lowe also specified that it be open. A flatscreen TV, which deploys in front of a window, slides neatly away into a bookcase, again so it won’t block the light.

Sanlorenzo offers two layouts for the galley: One is an enclosed space forward of the saloon and aft of the superyacht wheelhouse on the main deck, and the other on the lower deck. The Americanisation package is a further variation. It’s a country kitchen illuminated from the windshield and skylight, created by opening the wall between the galley and wheelhouse, moving the helm to port and adding a dinette. The galley itself is by Boffi, but all the appliances are “chosen to have US specs and can be easily serviced in the US,” says Lowe.

The entire forward area is a flexible space for owner or crew use. This hull added a privacy door leading to the SL86’s crew quarters, located forward on the lower deck, and expanded the accommodations to comfortably sleep up to three in a bunkroom and captain’s cabin.

The shared head was enlarged via clever space-planning and eliminating the bidet, deemed unnecessary in this market, which gave room for a separate shower stall. The woodwork also is finished to high standard.

“With more and more families cruising with teenage children, it’s important to give everybody space,” she says. This led her to designing a large seating/dining area on the foredeck with a convertible high-low table and sheltering sun sails instead of a couple of sunpads more traditional on yachts of this size.

Lowe and the Sanlorenzo Americas team had the steward/ess in mind when they placed the main exterior dining table on the aft deck instead of the flybridge to avoid the stairs. “The stew’s job is to make each meal an event, so why not do this in a lot of different areas,” she says.

One of the SL86’s major selling points is its tender garage, which allows the flybridge deck to be dedicated to relaxing and entertaining. Lowe placed Paola Lenti lounges, sofas, chairs and tables in informal groupings on the flybridge, enhancing the resort feel of this open-air deck. “[It] is all interchangeable. You can push the chairs around and pull them up to make seating areas,” Lowe says.

Take a closer look at the SL86 America's Edition

The flybridge bar has built-in barbecue, sink, icemaker and optional refrigerator, and is fronted by striking stainless steel Philippe Starck-designed barstools. Overhead, the hardtop incorporates a skylight with electric louvres that can be opened beyond the vertical position to block the sun more efficiently, a feature introduced on the first SL86.

The forward helm is fully equipped with a huge panel well laid out for ease of use, and the one-level flybridge provides good sightlines for docking and other manoeuvres. It is clear that this will be the preferred driving station for most captains or owner/operators.

“We have a little more side structure to our flybridge, and a substantial windshield, topped by clean, zipped isinglass with no stanchions to block it,” Jousma points out.

The SL86 also has a life-raft system with autostatic release built into the superstructure on one side of the flybridge, a Sanlorenzo trademark. Here, and in the machinery spaces, you can see the “trickle-down effect” of heavy-duty systems and equipment from the shipyard’s larger yachts.

Like many other European builders, Sanlorenzo’s American package includes US electrical systems, bigger generators and air-conditioning suitable for the tropics. “But for us it’s more than that,” Jousma says. “We are big believers in redundancy. If you are in the Bahamas, for example, for the Christmas holiday with your family, you can lose an engine and still find things to do…

The SL86’s engine room is accessed via stairs from the yacht’s aft deck. The twin MTU 12V 2000 M96L engines are positioned so there is plenty of room for service and maintenance access on all sides. Tie wraps every six inches on the electrical system wiring harness testify to Sanlorenzo’s superyacht-level technical standards.

The shipyard’s mantra is “made-to-measure yachts.” While the SL86 shown in Fort Lauderdale was built on spec — one of several Sanlorenzo Americas orders each year to offer clients who prefer instant gratification — the majority of the new boat orders, even for a yacht in this size range, are for custom builds.

Jousma and Lowe work intensively with Sanlorenzo Americas customers during the design phase to be sure each yacht is personalised to suit their individual tastes.

Jousma reports that a yachtsman who has owned both American and European boats came up to him during the boat show and said, “We’ve always found Sanlorenzo to be the most American-friendly Italian boat that we’ve been on.” Jousma replied, “That’s what I like to hear.”

6 tropical destinations the Sanlorenzo 460EXP is perfect for exploring on