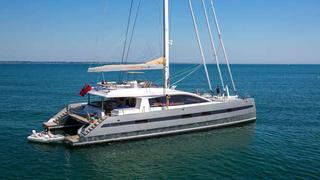 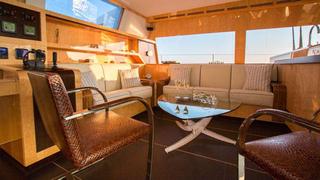 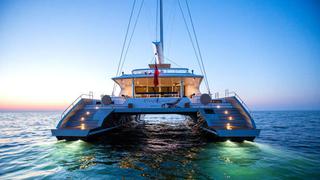 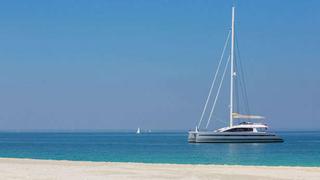 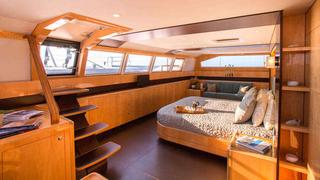 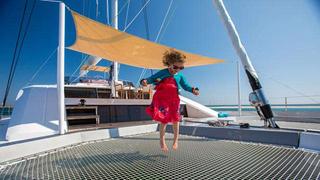 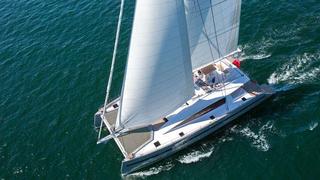 A shipyard’s commitment to quality combined with an owner’s lifelong passion for sailing has resulted in the first Long Island 85 catamaran WindQuest – a robust 25.9 metre success story. After five years using a Privilige 745 catamaran – in which he had bought a stake – as a summer home, retired US businessman Milton Sender was sold on the catamaran concept and set out to create his own custom version. Teaming up with renowned French naval architect Marc Lombard, who had designed the Privilege, Sender was introduced to French yard JFA. Their collaboration has created the Long Island 85 catamaran, of which Sender’s yacht, WindQuest,was the first example launched.

‘I love the exterior styling,’ Sender enthuses. ‘It doesn’t look overpoweringly large, and it has a beautiful proportion to it. It’s huge inside and compact outside, and I think this is the best of both worlds.’ Destined both to be used as Sender’s new summer home, and for chartering in the winter in the Caribbean, WindQuest offers astonishing guest space in a solid package – aluminium hulls mean she is a true go-anywhere fast cruiser.

Following Sender’s experiences on the Privilege, the choice of a catamaran was easy. ‘I recognised this was a much more confortable way to sail fast,’ he says. ‘You aren’t at a 45-degree angle all the time, you can have lunch and not spill the wine and still have a good sail.’ For JFA, choosing aluminium for the hulls was based on the idea that a one-off mould would have been too costly, with neither Sender nor JFA knowing if another client might want a similar yacht. As it is, the yacht has been built to a standard above the top production yachts but just short of a no-expense-spared custom superyacht, with a view to creating a semi-custom range of catamarans under the Long Island banner.

Aluminium hulls are combined with a composite superstructure and carbon reinforcement to create a yacht that not only remains lightweight, but also carries several advantages – with the hull prone to deforming rather than breaching in the event of a collision, and with aluminium able to be repaired in almost any corner of the globe, WindQuest has the potential to be a true world cruiser. Clever elements include a lifting system for the tender – carried athwartships on the aft platform – which comprises a carbon pole that extends from the end of the boom coupled with a halyard. JFA has also consulted with the likes of Van Cappellan to ensure a high degree of sound and vibration insulation, while the interior uses various advanced techniques to deliver luxury without weight.

Remaining relatively sleek in spite of the prodigious interior volume was a key criterion for the design and build. Moreover, the naval architecture as been refined to ensure the yacht does not experience wave slamming under the main accommodation pod while underway – a common problem with many catamaran designs. WindQuest's aggressively angled hull stems scream both performance and serious cruising intent, while the flybridge profile has been kept well in proportion to the overall length without compromising exterior space or sail handling.

A simple palette of pale browns, creams and honey has been achieved through the judicious use of maple and wengé as the main woods. The layout is also superb, with two double guest cabins aft in each hull, a large central saloon-cum-dining area, and a master suite that offers a forward sleeping area with spectacular views, a lower master en suite with steam room, and a port midships study with sofabed which cleverly converts to an additional guest double when required. ‘What Marc designed feels like what you would have on a 150-footer,’ says Sender. ‘It’s spectacular – it’s the largest master cabin and accommodation suite you could imagine.’

An extensive aft deck with a permanent dining area to port is complemented by a flybridge/sun deck area, which also features the main sailing controls and the outside helm station. Forward, a yawn of deck in front of the master cabin – which can be accessed directly from the cabin – serves as an owner’s deck, with an additional level on the eyebrow above the cabin offering a secondary owner’s perch. Access to the water via the hull transoms is superb, and the forward trampolines are always a favourite for relaxing in the sun.

Built with performance in mind, WindQuest has already hit 16 knots under sail, but this has not been at the expense of heavy weather performance. We joined the yacht on one of her early sea trials and stood with whoops and smiles as she pushed through a hard chop at 12 knots on a reach with a double-reefed main and staysail as the wind climbed to 55 knots true. Not that this should have been a surprise – JFA has built a reputation for constructing solid, go-anywhere world cruisers, both sail and motor, which have visited all corners of the globe.