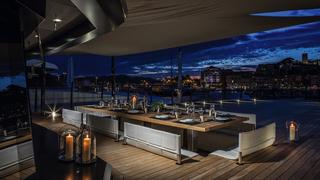 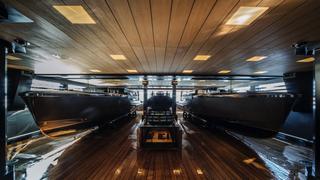 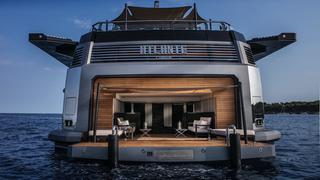 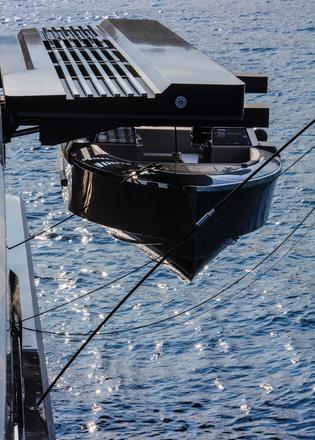 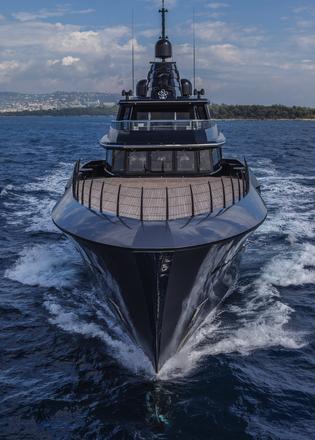 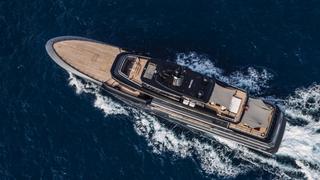 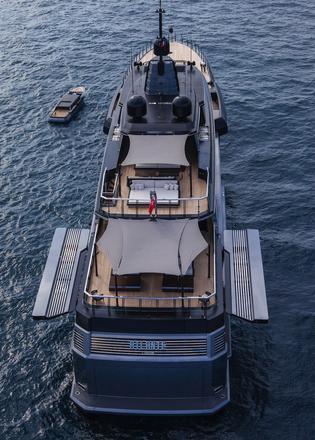 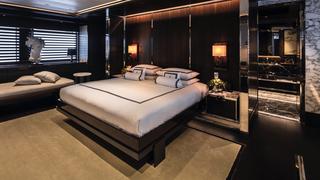 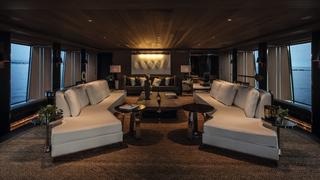 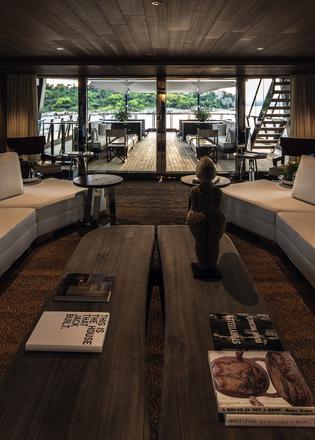 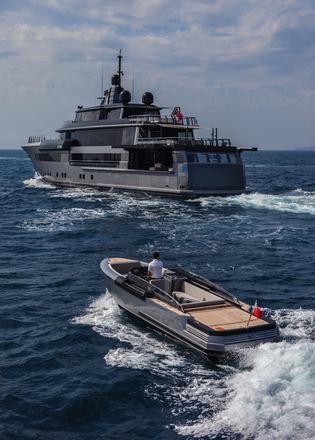 Class warrior: why everyone is talking about Atlante

All pictures courtesy of Maurizio Paradisi

To win the contract for 54.8 metre Atlante, designers and yard were given an uncompromising brief: very square, very military, very camouflage. The result is remarkable.

There are no new ideas. “We simply take a lot of old ideas and put them into a sort of mental kaleidoscope…we keep on turning and making new combinations indefinitely; but they are the same old pieces of coloured glass that have been in use through all the ages.” That’s Samuel Clemens, aka author Mark Twain, in his autobiography, reflecting on the genesis of ideas.

The innovative minds involved in the creation of Atlante, a 54.8 metre custom yacht built by Italian shipyard CRN, must have really given their kaleidoscope a good twist.

With her metallic grey hull, superstructure painted a matt jet black, 200 square metres of glass windows and a lack of curves at odds with her nautical nature, she truly stands out.

Step aboard, and this new yacht takes on an ever more intriguing dimension.

From a relaxing beach club finished in attractive spruce, forward of twin spaces used as a gym and massage room, central stairs lead to the main deck.

At the top of the stairs is a vast area finished with wide teak boards and enclosed on all sides. It takes a few seconds to adjust to the light seeping through big louvres before details become visible.

Eventually, out of the shadows emerge a large movie screen and a couple of chairs, but also hinges on the large louvred shell doors on port and starboard, a black crane integrated into the ceiling and attachments on the floor.

The hidden tenders launch to create a main deck beach club, while the transom door folds down to create a second lower beach club. Pictures courtesy of Maurizio Paradisi

This is an exceptionally elegant tender garage that transforms into a vast panoramic beach area at main deck level. The large side doors slide outward before lifting up. When evening comes, if the mood strikes, this aft deck/upper beach becomes the ultimate outdoor theatre, open to the breeze, yet private.

It is the first of many familiar areas on board that have been given the kaleidoscope treatment. It was the yacht’s owner who inspired this innovative space: “I told the designers I did not want to see the tenders.”

He’d looked around marinas and through the pages of magazines but never found a vessel that truly inspired him. “I don’t like round windows or round shapes,” he says. “I wanted to build something very square, very military, very camouflage, [a boat] that does not move much when it’s anchored offshore, but most importantly one with very clean, very simple lines, for sure incorporating great details, but not over-designed.”

An entrepreneur and a creator known for having a fierce eye for detail, he has no fear of disrupting the credos of the yachting world.

Aside from his vision for the look of his yacht, he had a few principles: one, he wanted to build in Italy; two, he wanted a vessel that could navigate beyond the confines of traditional Mediterranean cruising grounds; three, he wanted to find partners who would understand, respect and translate his vision accurately. He found them in Carlo Nuvolari and Dan Lenard, of design studio NuvolariLenard.

It was Lamberto Tacoli, CRN’s CEO, who recommended the famous Venetian design firm. “‘You need an architect, an engineer and less of a designer,’ Tacoli told me, ‘[Dan] Lenard is the right person for you.’”

Trying to assess his vision, Lenard prompted the owner for his taste in cars. “He asked, ‘Do you like Porsches, the Panamera perhaps?’ I said, ‘No, just the opposite, I don’t like anything very sporty.’ And then I said, ‘I think my point of reference is the Range Rover.’”

After he had listened to his likes and dislikes, Lenard told the owner, “Well, what you describe is not very nautical,” but soon Nuvolari Lenard had a project that matched his vision closely.

Lenard resolved the tender conundrum with the elegant main deck garage that houses two nine-metre tenders designed by Nuvolari Lenard to match the feel of the mothership.

It all seems so new, so fresh. Except, “It is an old idea,” says Carlo Nuvolari. “It was common 10 years ago, in America especially, for yachts to stow the tenders [on the main deck aft]. But the tenders were stealing a lot of space and there was no alternate use for that space.

The interior of this garage is finished like a yacht garage should be. Normally the first thing you do when you reach your destination is to splash the tenders, so then you have this big open area and those doors are usually up, creating shade. It’s a great space to entertain."

“Another consideration was to raise the yacht,” Nuvolari adds. “Many times, when you dock in a marina you are between two boats and often they are bigger boats – think Monaco – so the lower deck feels very low.” With obstructed views “those main decks are not going to be used. So we transferred all these spaces to the upper decks”.

Atlante’s bridge deck is divided into two areas aft and forward of the mostly angular deckhouse (Nuvolari points out that they actually have a subtle curvature).

Forward is a large up/down teak table set into a recess in the deck. The table, which matches the decking, can recede completely allowing the deck to serve as a helipad that sits atop a toy garage and mooring room.

Exceptionally wide walkaround decks, perfectly protected by windows and a wide overhang, lead to the aft section of the bridge deck, set as a comfortable exterior saloon with flexible table arrangements.

Above still is a sundeck with a superb 6,000-litre spa pool whose soothing waterfall and gurgling sounds are best enjoyed from the large sunpad facing toward the bow. Further aft are a dining area and more flexible lounging space.

Despite his enthusiasm for what Nuvolari Lenard did with Atlante, the owner did not choose CRN because of its referral. Unlike other yards he consulted, he says, CRN did not ask him to compromise on his ideas. “It was the only company that really guaranteed me a custom boat,” he says.

The yard started with a CRN naval platform of 55 metres with a moulded beam just a hair shy of 10.2 metres. “The bow was custom designed with a countersink typical of an explorer,” says Simone Lorenzano, project manager for Atlante at CRN. But the designers stopped short of giving her a vertical bow. “We disagree that a straight bow should be vertical; the boat should have a grade of flare to deflect the sprays and be more gentle at sea,” Nuvolari says.

Indeed, from the mid-hull up, the yacht is a pure custom creation. CRN’s project team had to find novel solutions and subcontractors able to deliver products suited to the particular demands of a design driven by aesthetic.

There is abundant use of stainless steel inside and out, and removable stanchions, custom made of steel with a painted fibreglass finish. Aligning the polished stainless steel plates on the bow and these hull railings around the helipad, and joining the stainless steel details to materials on the inside were some of the CRN craftsmen’s biggest challenges.

As important as the details you can see are those you cannot. Mooring equipment and anchor chains and winches, for instance, are all invisible.

Visible is the radar arch with its dark paint, a design element in itself, along with the Nuvolari Lenard-designed stainless steel sculptural “mast pole”. But you have to talk to the CRN project manager to discover what you can’t see.

For instance, “The air-conditioning units are in the mast and in the technical space of the sundeck coachroof; a ventilation trunk brings fresh air down to the saloon. It was the only way to leave the saloon free from fan coils and technical spaces. We had to pay attention to potential noise, so we used a thick material inside the plenum to dampen the sound,” explains Giorgia Martinelli, CRN’s project team manager.

The masculine and intimate interior designed by Gilles & Boissier

The saloon may feel nicely chilled but it has a warm décor, which was realised by a happening interior-design powerhouse from Paris: Gilles & Boissier. The owner had a well-established relationship with Patrick Gilles and Dorothée Boissier, and the firm has a growing portfolio of private homes, boutiques, restaurants and hotels, which includes the first Baccarat signature hotel recently inaugurated in New York.

Atlante's is their first motor yacht interior, which Boissier describes as masculine and intimate. “It is a very instinctive project, very personal and devoid of references to the world of yachting,” says Boissier. “We have developed it in a very introspective manner, independently of the exterior.”

Despite this approach, no disconnect is discernible between interior and exterior design. The dark ambiance inside and stainless steel details, as well as furniture, all of it custom designed by Gilles & Boissier, echo the exterior features.

The common thread is the owner, who stirred the direction of this elegant interior that blends woods such as smoked oak, spruce or gum tree with exceptional marbles used liberally and somewhat unusually on many interior walls.

There is no questioning the luxury of the materials used, but perhaps the most luxurious aspect of this interior is open space. High ceilings, especially in the master suite, where height exceeds 2.22 metres, and wide corridors contribute to a sense of wellness and ease in spite of darker colours.

“The boat is very personal,” says the owner. “The layout is quite classic, because I feel the classic layout was good for my use, but I did not want any compromise of space. I don’t have a huge dining room because I don’t want a huge table with 20 chairs you never use. I don’t have a real dining room inside; instead it’s a sliding table that can go up and down and we can still have 20 people eat inside.”

This different approach to space implied throwing out a few staples of more conventional layouts. For instance, there is no captain’s cabin on the bridge deck; the captain enjoys a large cabin on the lower deck instead.

And because the stylish pilothouse with its spectacular glass bridge as centrepiece is also a space for guests to enjoy from a comfortable panoramic banquette, the captain’s office had to be very space efficient.

“I really did what I like. I did something very open, very my style, very no-compromise,” says the owner, who enjoyed the process of creation immensely, taking those pieces of coloured glass and rearranging them in a beautiful, non-traditional package.