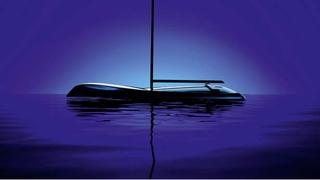 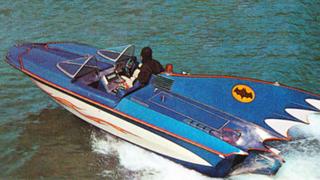 BatYacht: The wild Will King concept that could be reality

Zig zags. It seems an unusual start point for a conversation about a revolutionary new yacht design, but for entrepreneur Will King the art of the ‘zag’ when everyone else is ‘zigging’ is a central tenet of his philosophy – both in business and beyond.

Founder of the King of Shaves range of male grooming products, King has seen an idea that started with a shaving oil back in 1993 grow into a global brand that is challenging established giants Gillette and Wilkinson Sword. Aside from his obvious drive, King puts the spread of his über-cool brand down to the art of the ‘zag’, using industrial design to differentiate his products and embracing new media and hip associations to capture a new generation of customers.

A passionate sailor, King had originally intended to pursue a degree in yacht design before disappointing A Level results pushed him into studying mechanical engineering. After a stint selling advertising space for a marketing magazine, King was headhunted into the world of conference and corporate event production, before redundancy forced him to rethink his future. He decided he needed to ‘make product’, and the King of Shaves brand was born.

When not ‘shaving the world’ or spending time with his son, King sails at every opportunity. ‘The highlight of my sailing career,’ he recounts, ‘was winning Cowes Dinghy Week in 1997 in a Laser.’

In 1999 he bought a 13.7 metre Beneteau which he kept in Grenada, and his subsequent and extensive sailing exploits include crossing the Atlantic on an Oyster 53 in 2005. Naturally, his thoughts turned to the design aesthetic of yachts.

‘I looked at what was out there,’ he explains. ‘The Wally brand has developed alongside King of Shaves, and I have followed them, looking at how they have gone about evolving things. I looked at their aesthetic, but while they are cool, they haven’t yet gone in a completely different direction from a conventional sailing yacht.’

King began to think what sort of yacht would appeal to him, and to the new guard of young entrepreneurs from the Google and Facebook generation who, as King puts it, ‘dare to be different’.

‘The yachts that are on sale now, those are what their dads would buy,’ King explains. ‘They don’t want that. In the same way we compete with Gillette, you have to consider what it looks like – the design has to zag off at 90 degrees to get out of the dirty air…’

Inspired by two significant launches – Maltese Falcon and motor yacht A – King began to wonder what would happen if you were to combine the stable platform of a motor yacht with a unique take on the sailing yacht, incorporating style cues from such diverse things as a bullet train or a razor. Enter the 37.6 metre, stealth-like, carbon BatYacht – a truly zag yacht concept.

‘BatYacht is the yacht that Bruce Wayne would own, to sail off into the sunset with Vickie Vale,’ King enthuses. ‘She is a performance cruiser rather than a racer, but she’s the sort of yacht that, when you return to harbour, everyone will stop and go “wow”’.’

Without doubt, everything about her is radical. Incorporating design cues and styling from industrial designer James Mason – who has been responsible for bullet trains, aircraft and various other projects – the yacht features a reverse bow and distinctive shaping above the waterline, while aft of the mast – which would carry a BatWing soft wingsail – the entire after area would be covered by a giant, fighter jet-style canopy.

The after end of the canopy will slide back, revealing the cockpit while also forming a canopy over the bathing platform, but perhaps the biggest innovation is in the cockpit itself.

‘The aft 10.5 metres will be horizontally gimballed,’ explains King, ‘on vast carbon fibre and polyastomer “rollers”, computer controlled, like a car’s suspension.’

This would mean that the aft deck would remain level at all times. The concept is far from fantasy. ‘The technology exists today to build it,’ says King, ‘and the gimbal system is currently going through a patenting process.’ Moreover, King has a specific timeline for this project.

‘This can be built… But it’s the aesthetic, the stability element, the carbon, the wingsail – I think it’s zag enough to provoke some interest.’

'I had the idea sketched out, got Mason in along with a couple of model makers, had a model made and have lived with it for four or five months to see what I think of it. The plan is now to put it into the market. Pricing would be around £17 million to £20 million, and I’ve talked to four yards I think could build it.

‘This can be built, although some of the engineering needs to refined. But it’s the aesthetic, the stability element, the carbon, the wingsail – I think it’s zag enough to provoke some interest.

‘We live in a time of “individuality”,’ concludes King. ‘If people have been successful, they don’t want to own another samey superyacht.’

Startling though the BatYacht is, there is a sense of credibility about King and his ambitions. You can’t help but feel that this yacht really will hit the water in 2016. After all, as the man himself will attest, ‘It’s got reality behind it, and where there’s a Will King, there’s a way…’

The birth of superyacht project Skyfall