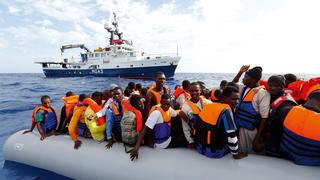 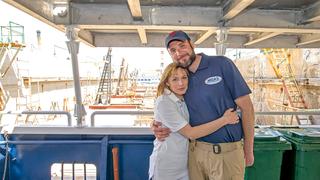 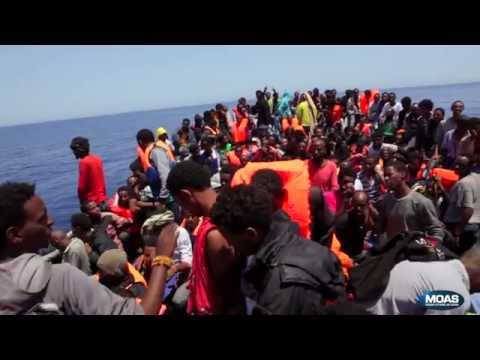 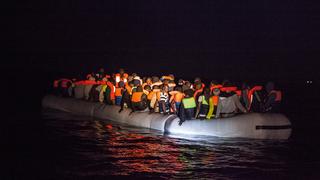 All pictures courtesy of MOAS

Billionaire couple Christopher and Regina Catrambone have privately funded an explorer vessel to save migrants who are risking their lives attempting to cross the Mediterranean Sea after the sight of a lost floating coat forced them to take action.

"My husband and I were on the deck and we saw a winter jacket floating in the water, like a ghost," Regina says.

They asked the Captain how the jacket had come to be there. "His face became very dark and he said probably the person who was wearing it is not with us any more. That started to trigger our attention."

Their resolve hardened when Pope Francis visited Regina’s home region of Calabria and called for more people to get involved.

"We looked at each other, me and my husband, and we said: 'Let's do something.' From this moment came the idea of buying a boat and doing something in the Mediterranean, where people are dying every day.”

Christopher and Regina immediately set about establishing non-profit organisation Migrant Offshore Aid Station (MOAS) using millions of their own money. The couple own and operate Tangiers Group and this successful company helped finance the launch of MOAS, which has rescued nearly 12,000 people to date.

What MOAS does is at once straightforward and complicated. Working closely and exclusively with official maritime organisations that co-ordinate rescues at sea, they dispatch the vessel and her crew of 23, including volunteers, to rendezvous with migrant boats. They radio the authorities, help people on board their vessel, provide first aid and then take them to an authorised location (another vessel or a port).

“Our mission begins at rescue and ends with disembarkation so we are not involved with resettling migrants,” explains Regina. “Some of our team members, myself included, have kept up informal contacts with some of the people we have saved. It is always great to hear that somebody has found some security and stability in their lives. Unfortunately we also know of people who are still struggling to achieve this.”

Watch the video below to see one of the rescues in action:

Critics say MOAS encourages a growing influx of immigrants that no single European country can absorb, but Regina rejects that argument. “We believe that civil society has a moral and ethical responsibility to improve the life of everybody and to fill the gap where the government cannot so people will not die,” she says. “If you can do it, just do it.”

While donations are now helping sustain the organisation and they are busy running their successful business, the Catrambones are committed to the non-profit they’ve created. Christopher, Regina and their daughter have all gone on trips in the Med aboard Phoenix. They once spotted five wooden boats that had begun to sink, sending 2,000 people into the sea. “Imagine, 2,000 people in the water,” Regina says.

Despite not knowing who the people aboard these rickety vessels are, Regina is not afraid. Safety experts warn that terrorist organisations can infiltrate migrant groups, presenting a threat to private vessels and their crew. But MOAS does not work alone. “Security risks are mitigated through co-operation with stakeholders and maintaining updated situational analysis,” she says. “To date we have had no serious security threats.”

After a first season working alongside Italian maritime authorities, MOAS began to attract the attention of other like-minded individuals and organisations. After a winter hiatus, MOAS resumed its rescue efforts in May 2015, this time in conjunction with Doctors Without Borders.

Donations from corporations and private donors from Germany, Italy and some from the United States, where MOAS is also registered as a charity, have helped sustain it. Still, as is the case for any non-profit, fundraising has become a constant obligation.

Regina was at the Monaco Yacht Show in September looking for vessels able to assist in the Mediterranean while MOAS expanded its efforts to the Bay of Bengal in late 2015. While attempts to reach Europe from Africa continue as winter sets in, another migrant crisis is looming in Southeast Asia. In May 2015, 5,000 people from Bangladesh and Myanmar were left to fend for themselves after smugglers abandoned them in the Bay of Bengal. MOAS is looking to become operational there over the winter, working closely with international organisations and regional authorities.

“We are getting closer to finalising an agreement to have another boat in the Med,” she says. “Our plan is to have two simultaneous operations, in the Med and Southeast Asia, throughout 2016.”

Video: yacht rescues 11 refugees from drowning in the Mediterranean