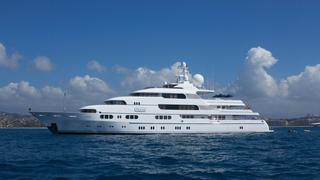 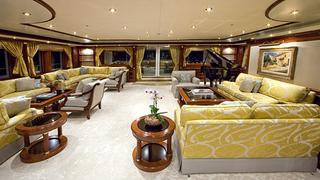 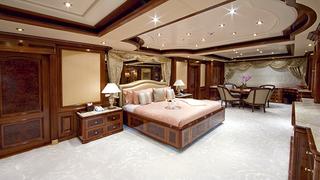 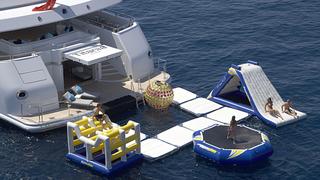 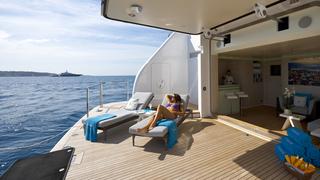 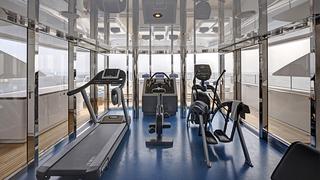 In 2006, the Lürssen yard in Rendsburg delivered Apoise. The styling was the work of Espen Øino, while the interior designer was François Zuretti. This proved to be a winning combination of yard, naval architect, stylist and interior designer as the yacht turned out to be a successful charterer.

The original owner took delivery of the yacht on his retirement in 2006 and enjoyed cruising around the world before putting her up for unreserved auction in March 2010. Bidding started at 20 million, and less than 15 minutes later the yacht was sold for 34.75 million.

British entrepreneur John Caudwell was the buyer, and he decided to put his new acquisition to work earning her keep on the charter market. He shrewdly decided to live with the boat for a year, slowly drawing up plans that would maximise her lifestyle potential.

'At first I wasn't going to change anything except for the soft goods,' says Caudwell. 'We wanted a bright and cheerful interior with colours like the Med. Then we realised we just didn't like the gym and it seemed the layout did everything badly. I wanted two owner's suites - there was too big a difference between my suite and the room for my wealthy friends.'

To make the yacht more appealing for his own use and more attractive for charterers, Caudwell decided in 2011 that she should undergo a major refit rather than just a face-lift. This entailed rebuilding in three areas: the stern, which was lengthened to provide room for a beach club; the upper deck, which got a second master suite; and the sundeck, which was equipped with an acceptable gym.

The aim was to have the yacht ready for the 2012 charter season. Because they would be changing the business end of the yacht, the owner and his project management team at Hill Robinson took her back to Lürssen for the work, which, in the typical nature of refits, developed into a bigger project than originally planned. First, though, her name had to be changed to something more romantic. He chose Titania, the queen of the fairies from Shakespeare's A Midsummer Night's Dream.

The most difficult task was extending the stern by 3.8 metres, which directly affected the main and bridge decks. Work started with cutting off the stern section just after the final long hull porthole. Parallel to the cutting, which took one-and-a-half weeks, a new mid-section was assembled in one of the yards construction halls and welded to the hull. The original stern was recycled and reattached so that it would preserve the original look.

All piping and cables had to be disconnected and rejoined and deck hardware repositioned. Only the steering gear was untouched. The existing passerelle was lengthened, and because the main deck was enlarged by about three metres, the teak surface had to be augmented. New deck furniture was also put in place.

Instead of the original transom door opening to the lazarette and engine room, a much larger lift door now opens on to the new beach club. This has a bar at one side, a sitting area at the other side and enough space for a day-head and sauna. A rain shower in the doorway allows swimmers to rinse themselves off before entering.

'The big thing for me with this work was to be able to be in touch with the water,' says Caudwell. 'A lot of big yacht owners miss that. We have so many entertainment areas now that the boat has been transformed.'

The second big attraction for charter guests is to be found on the upper deck. From the technical point of view, the changes here were not as complicated as those at the stern but the results, for those who look for more prestigious interior usage, are much more spectacular. Originally designed by François Zuretti as an observation lounge with a lobby bar and a small exercise area forward of an alfresco living space, the new arrangement supports both the owner's use and charter by providing a second, nearly equal, master suite.

That observation lounge is now a full-beam suite with impressive panoramic view, an adjacent large bathroom to starboard, with shower and bathtub, completely clad in light yellow onyx, as well as a pantry and health spa. The aft part of this deck is arranged for outdoor activities, mainly sunbathing and relaxing in a longitudinal pool with an adjacent bar. A table for 10, with seating areas to the sides, allows for alfresco dining.

Everything on this deck except the dumb-waiter was stripped out, and the new walls and doors are a sandwich construction from metal frames and a core of mineral rock wool. The overheads are covered with leather panels, all in the same style and colours as used in the other master suite. The immaculate interior joinery was done by Vedder of Germany and the colour scheme and soft furnishings throughout were chosen by Rebekah Caudwell, John's daughter, who has a design studio in London. The master suite itself had a raised observation lounge, which Caudwell converted to a private massage and spa treatment room. The suite is entered through an exceptionally fine office.

The final major reconstruction work was enclosing the gym on the sundeck. Formerly just an open space for sunbathing in front of the antenna mast, this area has been converted to an air-conditioned winter garden, a gym totally surrounded by glass and equipped with exercise machines facing a large television screen.

Additionally, the whole boat has undergone a complete technical refurbishment, including modernisation of the bridge equipment, the guest laundry has been converted to a twin staff cabin, and the hull and superstructure repainted.

Caudwell visited the yacht three or four times during the six-month reconstruction process, with his enthusiasm occasionally adding features and items to the work list. According to Nick Hill, who was responsible for the project together with Karl Hartmann, the owner proclaimed himself very happy with the result. The inspired finishing touch, however, is unmistakably romantic rather than practical: a figurehead of the fairy queen Titania.