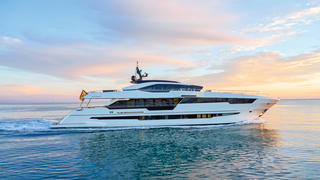 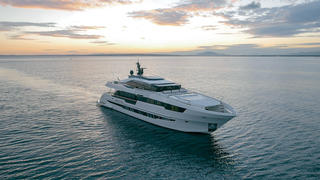 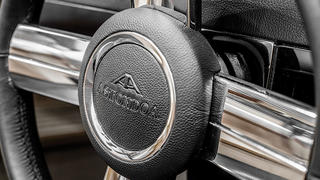 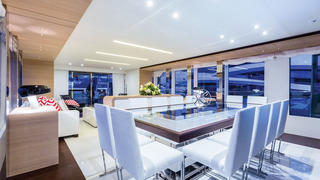 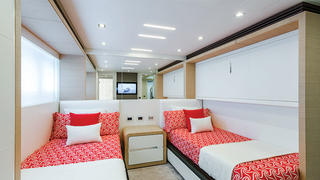 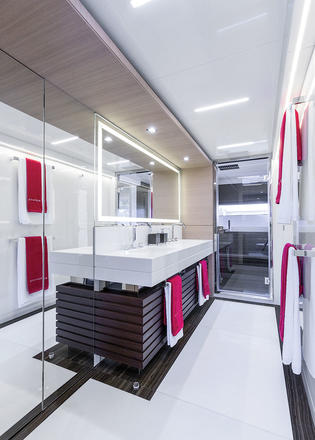 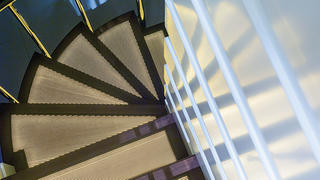 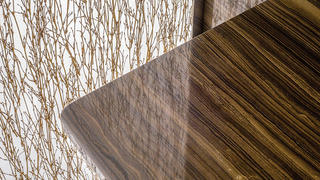 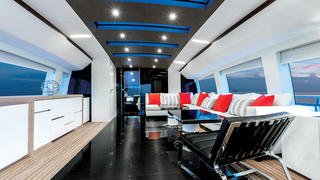 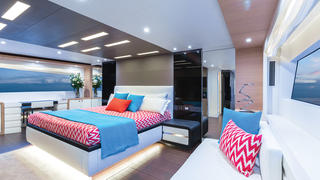 Wings to fly — Brazilian flair on board Astondoa Century 110 Sophye

First published in the May 2016 edition of ShowBoats International

Celebrating 100 years of boatbuilding, Astondoa found just the right client to make a centennial splash, giving him the freedom to create his ultimate yacht.

To talk to the owner of Sophye about his yacht is to learn about Brazil’s boating culture: One cannot be separated from the other.

His highly customized Astondoa 110 Century is adapted to the lifestyle with myriad details large and small from the stowage of the requisite Jet Skis to stowage for his wife’s shoes — 64 pairs. (In her defense, she is a TV fitness and fashion personality, so looking good is part of the job.)

But mostly, the yacht is envisioned as a comfortable and safe party central for an affable entrepreneur.

Spanish builder Astondoa was looking for a special project to celebrate its centennial year and when its dealer for America, David Galante of G Marine in Miami, turned up with his client’s unusual wish list, it was almost too much of a good thing.

Here was an experienced yacht-owning client who demanded customization and high-quality materials. He would be an active and enthusiastic owner in the Americas who would use his boat a lot — something builders enjoy.

There was only one catch: He wanted his yacht in just nine months. (Typical build time is 12 to 14 months.)

Yes, Astondoa had an already-fabricated 34-meter hull from its GLX series engineered and available, but could the yard accommodate the owner’s changes and still have a yacht to display at the all-important Miami boat show in February?

Assured by Galante that his client was a quick decision maker, Jesús Astondoa, leading the third generation of his family’s boatbuilding business, rolled the dice and shook hands on the deal.

In his corner, the yard has its own multi-axis router for shaping moulds and a workforce willing to work through the holidays to create a special centennial yacht.

Although the company builds up to 100 vessels a year, most are between 40 and 70 feet. It also builds larger yachts in steel, most recently a 150-footer named Amaranta P, launched in 2008.

As soon as the deal was struck, the client set about customizing the yard’s existing layouts. A self-described frustrated naval architect, this international business consultant immersed himself in designing the ultimate Brazilian yacht.

Stepping up from a Fairline 78, he knew he wanted an enclosed skylounge rather than a flybridge. “Women don’t like to stay on the flying bridge when the boat is running and half the party should not have to go downstairs,” he says. “I wanted a space where we could be inside and outside at the same time. Let’s get rid of the hot tub. I’ll never use it.”

One thing he would use is a pair of three-seat personal watercraft. “Brazilians think, ‘No Jet Skis, no boat.’ You have to have big Jet Skis, but I didn’t want to see them.”

The stern garage would be filled with a 15-foot Williams Jet tender and water toys, so could the personal watercraft be stored on the bow? Yes, they could, but the owner would not budge from his demand not to see them.

The Astondoa design team met the challenge with a partial garage forward of the sunpads. Although the big green PWCs are not fully enclosed, a “lid” keeps them out of sight from the side decks and bridge.

“When Brazilians go boating, we like to include our friends, and if friends of friends are passing by on the dock, we’ll invite them aboard, too,” says the owner with a laugh.

“That means we need lots of seating, lots of places to have a drink, a barbecue, a place for my daughters to play and music everywhere.”

“If I want to make myself a sandwich, I want to be able to go to the galley and fix it. That means it needs to be organized in a way that I feel comfortable, yes, but that I don’t get in the way of the chef,” he explains.

The solution is a dream kitchen with plenty of windows and a counter area that functions as a snack counter with stools and as the owner’s sandwich assembly station, opposite cleverly hidden, deep pullout pantry shelves and a bank of refrigerators and freezers.

The galley will often function as a prep area with the well-equipped outdoor kitchen on the upper deck likely to get more of a workout.

As a man who says he lives on airplanes — he wanted nothing to do with an onboard office. In fact, at Sophye’s passarelle are two boxes, one for guest shoes and one for guest cell phones. “I want to share my time with my guests and vice versa,” he says.

Although 95 percent of Sophye is already part of the standard spec for the 110 Century, it may not be in the same place or the same size.

Extra features include 16 refrigerators strategically placed throughout the decks and in each stateroom so beverage service is a constant and an AV control system that syncs music throughout the yacht. Sophye also features Side-Power thrusters and stabilizers.

“I started drawing on the drawings; move this here, put that there,” says the owner. “Jesús said to me, ‘If you can draw it, I can build it.’ He gave me wings and I flew with them.”

On the owner’s many visits to the Santa Pola yard, the two men came to appreciate each other’s drive for the best solution. “Do you know how Jesús does quality control at the yard? With a hammer! He walks around the boat and if he sees something he doesn’t think is right, he smashes it with his hammer. It can’t be fixed, it has to be replaced.”

Although the boat is composite, she is not designed as a sprinter; her owner does enough of that in airport terminals. Volume and comfort are his game.

Where the building material shines is in ease of maintenance and the fact that the builder could make one-off custom parts for built-in seating and storage.

On sea trials out of Port Everglades, Florida, Sophye’s heft was evident, although the nearly flat water kept us from sampling the benefits of the high bow’s bold shape.

The PWC garage and crane on the bow add considerable weight, but Galante says the yard compensated by shortening the chain on one of the two anchors rather than adding ballast aft.

The hull design does feature a lot of forward buoyancy, and a sharp, short chine coupled with a knuckle deflects spray and quickly widens the beam at deck level.

For the décor, the owner was adamant about not being surrounded by dark joinery, although the builder’s woodworking shop in Almansa is top-notch. “Brazilians don’t want to go boating in something that reminds them of a coffin,” he says.

For the interior, the yard proposed Cristiano Gatto, who has worked with Astondoa for 15 years; that suited the owner perfectly. “My mother was Italian and I love Italian things, so I said yes.”

The owner and designer arranged to meet in the Frankfurt airport between connecting flights. “We had a two-hour meeting in the departures lobby. He showed me his ideas, colours and material choices. I said, ‘Yes, no, done,’ ” the owner says.

One of the standout design features is also a clever weight-management device. Carbon fibre floors with a clear satin finish in the wheelhouse and skylounge are edgy and pair well with the ubiquitous stainless steel and leather. The result is youthful and sporty, although so many hard surfaces can amplify sound.

“It was designed to be clean, uncluttered, modern and, most of all, low maintenance. The elements are of exotic coffee-stained and textured oak, complemented by glass and polished stainless steel to defy being dated. The owner wanted his guests to feel they were in a yacht — not in a New York apartment,” explains Gatto.

LED light strips mimic the effect of skylights in the skylounge above. A big-screen TV doubles as art, a video wall or a black glass partition between the 12-seat dining area and salon.

“The skylounge is my favorite space,” confirms the owner. A few steps above the raised bridge, it provides an air-conditioned cocoon with large glass doors aft opening to the deck.

This is definitely party central at sea or dock with outdoor bar and al fresco dining options complementing an interior table that can seat 10 for dinner.

Another feature unique to Sophye is the pair of gull-wing doors that connect the side decks to the wheelhouse. The hydraulically operating doors lift quickly and have a back-up electric worm-gear-style lifting mechanism to make sure they don’t drop unexpectedly.

This solution, Galante says, was engineered to accommodate the position of the wheelhouse and side deck stairs, which, of course, were driven by the garage.

The master suite on the main deck lives large, providing great views. The en-suite head is separated from the basin and shower area by a glass wall that electrically becomes opaque and changes colours for privacy.

The walk-in closets accommodate two full wardrobes of clothing, a dressing area, space for madame’s shoes and accessories in wall panels and seating. There is a small flip-up desk for him in case of a work emergency.

“I have a deal with my wife; if I spend more than two hours working, she gets her cell phone back,” he quips. Overnight guests and family are accommodated in four more en suite staterooms — two queen and two twins, below.

Although the owner said he wanted to run his new boat with just three crew, the experience of the broker and builder prevailed and there are spacious crew quarters for six below, along with a massive engine room.

Astondoa embraced the concept of a custom megayacht inside a smaller vessel made to match the owner’s desires, according to Galante.

“It depends on how you are going to use the yacht, not how much you want to impress people with its size,” he says. “When having fun is your culture, having a boat that accommodates your style is the most important aspect.

“You could build a bigger yacht, but [the owner found he could] have all you need in 8,000 square feet of interior and exterior space.”