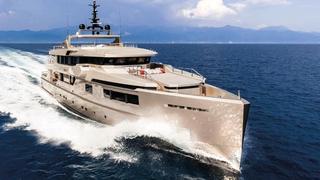 Admiral Tecnomar – part of The Italian Sea Group, which comprises Admiral, Tecnomar and Nouvi Canteieri Apuania – detailed its plans to expand in the Americas market. In addition to officially launching Admiral Tecnomar USA, represented by Eitan Ergas and Barin Cardenas, and based in Fort Lauderdale, Florida, plans were outlined for the brand to be on display in full force at next year's Fort Lauderdale show.

Of the nine superyachts currently in build at the recently expanded facility in Carrara, Italy, three will deliver to American owners in 2014 and be displayed by Admiral Tecnomar USA at the 2014 Fort Lauderdale show; these include the Maxima 47m, Nadara 40 and an Impero 37.

According to designer Sergei Dobroserdov, the E Motion series, 'comes from the simple statement "this world has changed, it has a new look."' The hybrid-powered superyachts combine electrical motors that can deliver speeds of up to 10 knots with combustion engines that can deliver up to 25 knots. Dobroserdov told the audience that the sale of another 52m will be announced this month, and soon two 52-metres E Motion motor yachts will be under construction at Admiral Tecnomar.

Vripack then told its story of how its designs for the Envy range of 33m, 40m and 50m semi-displacement yachts evolved. The Envy yachts have a theme of transparency, which is seen in the split-level saloon with full-height windows, and each living area is designed to change modes from day to evening.

Admiral Tecnomar is also in discussions with American designers as it looks to introduce designs to the US market that have a more American styling with Italian engineering.