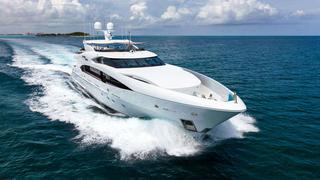 The newly delivered yacht has already been enjoyed by her owner with Finish Line based in The Bahamas for two and half months this summer, cruising the Exuma Islands.

Constructed in aluminium, she was built for a patriotic owner who wanted to showcase American craftsmanship and inspire more owners to build superyacht in the US.

'Finish Line is a testament, in a time when it doesn't seem like America manufactures anything anymore, this boat is as American as it comes,' says her captain Billy Lockhart. 'She was built in New Orleans, her interior was done in-house by the yard and the companies we worked with – including Yacht Next who designed the interior, to World Yacht survey to Stellar PM – were all Fort Lauderdale, Florida-based companies.'

Lockhart has been this owner's captain for 10 years and was well-versed in the directive for his new boat. 'We have a very well-established program of what we like to do, where we like to go, and how we like to do – we also have a very well-established design sense,' Lockhart says. 'This project started with me and Felix Sabates talking and asking, "Why can't anyone build us exactly what we want exactly how we want to do it?" And Felix said, "We can."'

Captain Lockhart goes on to say, 'She's a 20-knot-plus boat. She's fast, slick and modern, but classy and timeless, too – not over designed.'

An all-American beauty, Finish Line is designed to meet her owners exacting brief, which included high performance, a good range of 3,600 nautical miles and a shallow draft of only 1.7m at half load to enable cruising in her owner's preferred grounds of The Bahamas and US East Coast. She tops out at 23 knots powered by twin MTU 16V 2000 at 2,600hp engines. Finish Line runs in tandem with a sportfish boat, a 55ft Viking Yacht.

Her interior, by Joanne Lockhart of Yacht Next, is designed with distinct family-friendly features, such as a queen-berth guest stateroom that can convert to a children's playroom and another that converts from a queen bed to two twins. There is also an en suite with a bath for the kids, and as far as the owner's bath, rather than his-and-hers bathrooms, the owner's wife requested a large bath they could share.

Finish Line is finished in two-toned stained Sapele wood interior – all built entirely in-house by Trinity Yachts. The fit and finish of Finish Line speaks to the quality Trinity is capable of.

Billy Smith, Trinity Yachts vice president, says, 'We have a state-of-the-art carpentry department, but in the past because so many boats in progress, we would sub construct as many yards do, and our interior department's primary function would be to do change orders and fix any damage that might happen during shipping. We've always been very capable, just haven't had enough people to do do all the work ourself, now that doing a few boats per year, we can.'

Trinity Yachts also did the interior for the 50m Lady Sura it delivered earlier this year, 'but no one saw her, that was very private,' Smith says. With Finish Line, Trinity is able to show off its in-house joinery skills to their full affect.