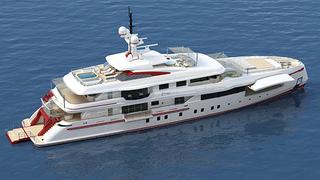 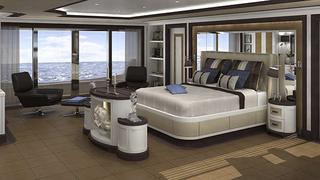 For four years the superyacht industry has been in flux. With the exception of a few of the oldest marque yards, most builders have evolved to survive and are re-emerging now as leaner, more flexible, more responsive businesses.

ISA Yachts’ 54.5-metre steel and aluminium motor yacht Forever One, due for launch from the Ancona yard in June, is an example of a builder developing with courage and insight, in an unexpected direction.

‘It’s the first fully custom yacht by ISA Yachts, the first big challenge we’ve taken in this category,’ says Gianluca Fenucci, head of project management and co-founder of ISA Yachts. ‘We’ve always based our yachts on platforms and every platform was customised with the client. But this client made a proposal that was totally custom. We were looking for business and had a team that could do this. Also, we saw the (industry’s) future was going in the direction of more customised builds. Those who were [being successful] were flexible enough, without taking too much of a risk. So we said OK, we feel strong enough for this.’

This decision was bolstered by a solid external team. Not only did the yard feel confident in the experienced owner and his vision, but he also came to them via Camper & Nicholsons scion Fernando Nicholson, who supported the build expertly throughout, along with the captain and project surveyor Colin Skinner. Horacio Bozzo, of Axis Group Yacht Design, was attached for design and naval architecture, while interior designer Alessandro Massari of Studio Massari joined soon after signing. ‘The owner wanted a yacht that looked different,’ says Bozzo. ‘This is totally different to other ISA yachts – they have their own family look, which is more classic.’

Of all the yard’s designs she is perhaps most reminiscent of the 50 metre Granturismo, largely due to her vertical bow. But as well as unusual red flourishes in the paint job – tributes to Ferrari and Coca-Cola, respectively the owner’s passion and business – Forever One has a much more substantial, almost architectural look.

This is partly due to the yacht’s prodigious 1,050 gross tonne volume – she has an extra deck and two metres in beam on the Granturismo. ‘[The owner] wanted us to build something on which he could live for the next 10, 15 years with his wife, family and best friends,’ says Fenucci. ‘A big traveller to go around the world in.’

Thus the yacht is expected to be MCA approved for unrestricted navigation, and two Caterpillar 3512 C engines will offer a 2,500 nautical mile range at 14.5 knots. But a relaxed and cosy lifestyle was also vital. ‘He wanted very loungy spaces,’ says Bozzo. ‘That’s why on the main deck forward, where you would normally have the master cabin, we have this huge dining and relaxing area, with a bar. There’s no formal dining area, it’s like a beach house.’

At the aft end of the same deck the main saloon offers different seating arrangements, so some can watch a film on the cinema screen, and others still watch TVs that pop up from coffee tables. The space can even be turned into a dance floor.