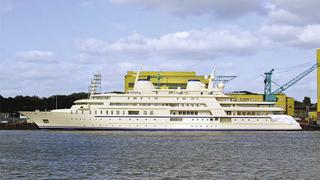 While theres been much recent discussion about building a new British royal yacht, it is often forgotten that a significant portion of the worlds superyacht fleet consists of royal and presidential yachts.

For yachts, these diplomatic privileges take the form of immunity from seizure and delay. But such immunity is not automatic: it arises only because in the past various governments have reached negotiated, reciprocal agreements.

This is important because it means that the immunity has a legal as well as a political foundation. So it is therefore possible to state precisely what the extent of the privilege is in any given set of circumstances.

So why have such immunity anyway? The answer is that, like warships, state yachts are the floating embodiment of a particular nation, and to try to ensnare such vessels in foreign legal proceedings could be seen as a slap in the face of a foreign country, and diplomatically embarrassing.

To make sure such faux pas do not happen, the treatment of state yachts is enshrined in the national laws of most states. It is a similar concept to the legal sanctity of foreign embassies.

But a line has to be drawn somewhere with regard to foreign sovereign immunities, to prevent them being taken advantage of. So a distinction is drawn between activities undertaken using these vessels which are commercial in nature, and those of a governmental or public nature.

For yachts, commercial simply means it has been chartered. While this tenet was enshrined in the Brussels Convention on Immunity of State Owned Vessels 1926, later in the European Convention on State Immunity 1972, and the Law of the Sea Convention 1982, these conventions must still have been enacted into particular countries domestic law to have any effect. This means that the commercial/non-commercial principle is not uniformly applied.

In the UK, the State Immunity Act 1978 strips immunity even where there is just an intention that the yacht be chartered  therefore encompassing charter positioning passages. In the US, the Foreign Sovereign Immunities Act 1976 allows for state yachts to be seized not only when being used commercially, but also to enforce a mortgage on the vessel. In France, the courts have held that a vessel may be seized simply when it is not performing a public act of state  which in reality is most of the time.

In most parts of the world, the privilege is what lawyers call restrictive in nature. This means if you want to rely on this privilege you have to demonstrate that your yacht is a state yacht and the circumstances justify what youre seeking to rely on.

Being immune from seizure and delay is, almost literally, a get out of jail free card for an owner who disputes a bill, for example. Seizing a yacht is a dramatic and effective method for recovering debts. There is nothing like it in land-based law.

Normally, if you were to supply goods or services to a yacht, and werent paid, you could only sue the person or company with whom you agreed to deliver the supplies or do the work. Liens cut through contractual matrices.