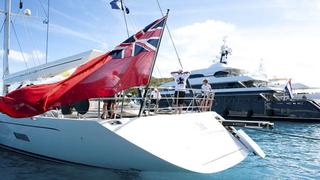 The acronyms and abbreviations of yacht regulations, regulators, associations, classifications and designations can look like alphabet soup to the owner moving into the world of large yachts. This handy guide to nautical terms can be your decoder.

AIS (Automatic Identification System) – Automatic near-shore tracking system required on vessels of more than 300GT. It supplements radar by tracking a vessel’s position, course and speed to be shared with other vessels via ECDIS and AIS base stations.

APA (Advance Provisioning Allowance) – A deposit paid by a charterer to cover expenses not included in a charter fee, such as fuel, food, beverages, mooring fees, visa fees, harbour fees, park fees and taxes. In the event of cancellation of a charter the APA is refundable.

COFR (Certificate of Financial Responsibility) – Applies to vessel operators who have demonstrated their ability to pay for clean-up and damage costs as required by the Oil Pollution Act. Vessels greater than 300GT powered by fuel oil are required to comply with the COFR regulations to operate in US waters.

Classification Societies – Publish class rules and technical requirements in relation to design, construction and survey of ships and has the authority to apply those rules; verifies compliance during construction and periodically through a classed ship’s life; publishes a register of classed ships; and is authorized by a flag administration as defined by SOLAS and listed in the IMO database. See Who’s Who of Classification Societies.

DPA (Designated Person Ashore) – Required for ISM to provide a link between the yacht’s owner and those on board at the highest level of management. The DPA monitors the safety and pollution-prevention aspects of the yacht’s operation and ensures adequate resources and shore support are supplied. The IMO sets minimum education standards for this position.

EPIRB (Emergency Position Indicating Radio Beacon) – Transmits the device’s position at 406MHz to satellites for rescue purposes. They are part of the GMDSS protocol.

Flag state – The sovereign territory where a vessel is registered. Each state has a designation authority that inspects and certifies its vessels. For example, US-flagged yachts are under control of the United States Coast Guard.

GMDSS (Global Marine Distress and Safety System) – A radio-based communications protocol mandated by IMO to increase safety and improve rescue operations. Equipment requirements are based on area of operation rather than tonnage. It also mandates a redundant means of signalling distress. Vessels under 300GT are exempt. A GMDSS operator license is required.

GT (Gross Tons) – Generally expressed as ‘gross registered tons’ before 1994, it is a function of the cubic volume of all enclosed spaces from keel to funnel expressed in tons, with 100 cubic feet equalling a ton. It is a capacity index for determining manning, safety and other requirements governed by IMO. GT is not the ship’s displacement.

IMO (International Maritime Organisation) – The United Nations agency responsible for the safety and security of shipping and the prevention of marine pollution by ships.

ISM (International Safety Management) A SOLAS requirement adopted by all flag states for all yachts in commercial service. It has 13 points for operation of the yacht and contingency plans for emergencies.

ISPS (International Ship and Port Facility Security) – Establishes protocols for risk assessment and security threats in ports and mandates formal security plans by both the port state and visitors to the port state.

LRIT (Long Range Identification and Tracking) – IMO requires all passenger ships and all cargo ships on international voyages to report their positions to their flag administration at least four times a day. This is generally done automatically via satellite service providers.

LY2 (Large Yacht Code 2) – Now superseded by LY3 of the MCA, LY2 sets safety and pollution prevention standards appropriate for pleasure or sport yachts over 24m or 150GT in commercial use and carrying no more than 12 passengers. It establishes an upper limit for governance by this code at 3,000GT and easier parameters for short-range yachts (within 60 miles of the coast).

MARPOL (International Convention for the Prevention of Pollution from Ships) – This not only covers oil spills but also pollution from chemicals, garbage and sewage and completely bans discharge in some areas.

MCA (Maritime and Coastguard Agency) – Implements the UK government’s maritime safety policy in the UK and among its Red Ensign partners to prevent the loss of life on the coast and at sea.

NOA (Notice of Arrival) / NOD (Notice of Departure) – Electronic advance notice to port states of arrival of ships from foreign ports. Typically applies to vessels over 300GT or recreational vessels over 45m. Each country establishes its own NOA and NOD.

NOx (Nitrous Oxide) – Amounts of this exhaust gas are regulated by MARPOL Annex VI, as it creates acid rain. Emission standards apply to engines greater than 130kW. It also establishes Emission Control Areas with stricter guidelines. The Baltic and North Seas were the first such control areas, with North America and the US Caribbean phasing in from 2010 to 2014.

NTVRP (Non Tank Vessel Response Plan) – For vessels operating in US waters of 400GT or larger. This is a written plan to reduce risk and mitigate damage for an oil spill. Similar to MARPOL regs for Shipboard Oil Pollution Emergency Plan (SOPEP).

Port state – The sovereign territory a vessel is visiting.

Port state control – Control via inspection of a foreign-flagged vessel voluntarily docked in another sovereign state’s waters. When flag states fail to remove substandard vessels from commerce, port state control can, enforcing rules adopted by the IMO. Inspections for compliance with safety and environmental standards are carried out by a Port State Control Officer (PSCO) who must be able to communicate with the crew in English.

PYC (Passenger Yacht Code) – A relatively new Lloyd’s Register classification alternative to SOLAS for yachts in private or commercial service carrying between 13 and 36 passengers created to override compliance with some SOLAS passenger ship requirements. PYC does not cover sailing yachts.

Red Ensign – A flag that originated in the 17th century as a British ensign flown by the Royal Navy and later by the British Merchant Navy. It is currently the civil ensign of the UK.

Red Ensign Group – The group of flag states that fly the Red Ensign. It comprises of the United Kingdom, its Crown Dependencies (Isle of Man, Guernsey and Jersey), and UK Overseas Territories (Anguilla, Bermuda, British Virgin Islands, Cayman Islands, Falkland Islands, Gibraltar, Montserrat, St Helena, and the Turks Caicos Islands) all of which operate shipping registers. Yachts flying the Red Ensign are regulated by the MCA.

SOLAS (International Convention for the Safety of Life at Sea) – This international treaty adopted after the Titanic disaster requires flag states to ensure their ships comply with safety standards for construction, equipment and operation. While its navigation chapter applies to all vessels, it general does not apply to pleasure yachts not engaged in trade. If engaged in trade and over 500GT, then regulations apply.

SOx (Sulphur Oxide) – An air pollution factor created from burning high sulphur fuels. It combines with NOx to form acid rain and its reduction in exhaust gases is mandated by use of low sulphur fuels.

SSO (Ship Security Officer) – Required for ISPS. This crew member is responsible for the on-board security plan and all security equipment.

** STCW (Seafarers Training, Certification and Watchkeeping)** – Referred to as ‘STCW 95’, it formalizes experience and training requirements for crew. It is almost identical to US Coast Guard regulations. Mariners on yachts under 200GT operating within 200 miles offshore are exempt, except if they make foreign voyages.

USCG (United States Coast Guard) – Responsible for operations and regulations as they relate to yacht safety for US-flagged vessels and vessels operating in US waters.