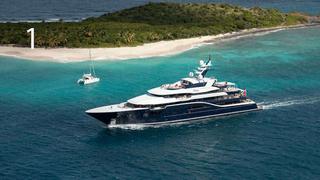 Years are spent tracking the order, build, launch and delivery of a superyacht, so there is nothing more satisfying than actually getting to step on board the most prestigious and largest yachts in the world. Well, one thing perhaps, and that is being able to take Boat International readers behind the scenes on board these notable – and often extremely private vessels – for an in-depth look at how each was born, built and breathes on the water after her launch. Of all the new yachts covered by Boat International in 2014, there were a few that sparked the most interest.

As the title of this story insists, every bit of Lürssen's 85-metre superyacht Solandge is designed for pure enjoyment. With curvaceous lines by the renowned yacht designer Espen Øino and a beautiful blue hull, she is a head turner no doubt, but its her large sun deck, bar, spa facility with sauna, steam room, massage room, gym and beauty salon and an outdoor pool that keep the attention. And as luxury yacht Solandge is for charter, she can be enjoyed by others beyond her owner, too.

"And the envelope, please..." The next best-read story didn't cover just one yacht, but introduced readers to the chosen few that were named winners of the much-coveted 2014 World Superyacht Awards. Dubbed the "Oscars of the superyacht world", the top prizes went to 99-metre Feadship Madame Gu, who took Motor Yacht of the Year, and the 32.64-metre Baltic Yachts-built Inukshuk, claiming Sailing Yacht of the Year. While these beauties sailed away with the big prizes, there were dozens more to be revealed as all of the 2014 World Superyacht Awards winning superyachts were announced.

3. Crazy Me: Heesen’s 50m has an interior as bespoke as her bold exterior

Head turner or head scratcher? Heesen's completely custom 50-metre superyacht Crazy Me proved both for the public, while perfectly serving the needs of her exacting owner. The undeniably eye-catching yacht has as many surprises inside as she does on the outside, including double-height ceilings, hydraulically opening superstructure sections and truly innovative use of glass. Not to be overlooked is the custom audio-visual system, with a high-spec sound system that turns the upper deck into a professional-grade disco.

Superyacht Blush garnered attention in 2014 as Sunseeker's biggest yacht yet, and its 47-metre flagship also boasted a celebrity owner at the helm in Eddie Jordan. Owned by the Jordan Family Trust, Blush is Sunseeker’s first composite-built 155 Yacht. Former F1 team owner-turned-BBC F1 pundit – and Boat International contributor – Eddie Jordan's relationship with the British builder spans 30 years, making him an ideal owner to take this big, bold leap forward with the yard. ‘I know what to expect from Sunseeker,’ he says. ‘I wanted a light, fast, comfortable and safe boat, and I think steel and aluminium carries too much weight. I’m a huge fan of this type of yacht construction.’

A first launch from a new Dutch builder garnered a good deal of attention and made it one of the most-read new yacht features in 2014. Built by the up-and-coming Lynx Yachts, Heliad II is one of those yachts that feels bigger than she is, as the cliche goes, by making good use of the space available. The trick? Blending a traditional-looking exterior with a modern, clean interior. The canoe stern means the aft main deck can extend all the way to the stern rather than being encumbered by a tender garage and swim platform – and note the clever tender garage on her starboard side.

6. Shemara: the 65m classic motor yacht is restored to her former glory

Everyone loves a comeback story, and the rebirth of classic superyacht Shermara was no exception. The iconic yacht was restored to her former glory and beyond in a loving refit, and Boat International has the exclusive to show off the amazing results of Shemara reborn. After reading the story, see the stunning video of historic superyacht Shemara.

Inspired by J-Class sailing yachts, but designed for cruising as well as racing, Tempus Fugit was a surprise performer when she emerged on the racing scene, exceeding the expectations of her owner and designers and proving her mettle against modern carbon-built yachts. Designed by Humphreys Yacht Design and built by Arkin Pruva Yachts in Turkey, the modern-classic 27.43-metre sailing yacht blends speed and style, and she's finished off with a un-painted, varnished, gleaming wooden hull that turned heads on racecourse.

Italian builder Codecasa launched the second hull in its Vintage F75 series superyacht, which, as the model name implies, is a nod to the past, and "was designed to allow owners to enjoy both classic beauty of a bygone era and the modern comforts of today." With classic lines and a residential, relaxing decor by Franco and Anna Maria Della Role that embodies this classic spirit, the latest yacht in this series is as inviting as they come.

9. Largest superyachts with heli-decks for sale

Because there is no use having a superyacht if you can't get on board her in good time, yachts with heli-decks are in high demand. Making our list of the 10 most-read yacht features in 2014 was a look at the largest yachts for sale with helicopter decks, which included a few stunners that are still available for sale, such as the 75.5-metre Lürssen Northern Star, 67-metre Amels Aquarius and the 58-metre explorer yacht Bleu de Nîmes. Meanwhile, helicopter-capable 57.9-metre Trinity Mi Sueno who made the list was already sold in 2014.

Italian yard Mondo Marine entered a new era of management, designs and aspirations with its 41-metre superyacht Nameless, described by the yard as "a bridge between the past and the future". A classic-modern interior by Italy's Luca Dini blends splendidly with her sporty exterior lines by Cor D Rover, who has given Nameless a fresh two-tone paint scheme that makes her like she's on the move even when at rest. Expansive outside deck spaces, with a spa tub and al fresco dining table, make her easy to enjoy.