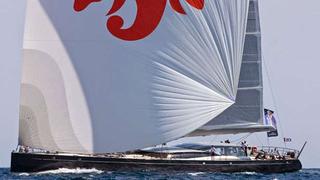 The first day of the Superyacht Cup saw the fleet contend with a day of changing winds and pressure in Palma Bay off of Palma de Mallorca, Spain.

Winds started at eight to nine knots then grew to 13 to 16 knots mid race as the main fleet of 21 superyachts competed on the 28.6 nautical mile coastal course. Meanwhile, the five J Class yachts set off on their second windward-leeward course of the week.

In seven-boat strong Class 1, the new 46 metre Vitters superyacht Ganesha took line honours beating out her competitors by seven minutes. The local knowledge of Ganesha's navigator, Nacho Postigo, coupled with the calls of her tactician Matt Humphries paid off in the day's changeable winds.

'It was a very typical day on the Bay of Palma when the wind in the morning is the Xaloc wind, which is more southerly,' Postigo says. 'The more you go out of the bay, the more it goes to the left. And more importantly, there is a big difference in pressure... On the left you can have 15 or 16 knots of pressure while on the right it can be quite light, and so the course was interesting because it mixed the two sides of the bay. It was difficult to predict what was going to happen next on the course.'

Going into tomorrow's race, Ganesha stands in second on the Superyacht Cup roster. Meanwhile, in Class 2, the Spirit Yachts-built 30.6 metre Gaia is leading her class and also at top spot in the fleet overall. Coming in third so far overall, but first in Class 3, is the 24m Claasen Heartbeat.

While yesterday's J Class-exclusive race saw superyachts Hanuman and Lionheart tie on corrected time, today Lionheart edged ahead and holds first position among the Js, followed by Rainbow and Ranger, leaving Hanuman in fourth and Velsheda in fifth.

Rainbow’s helmsman, Holland’s five-time Olympian Mark Neeleman, says of the J Class competition, 'We have had five a couple of times, but all the teams are getting better all the time, this is the best competition there is. The differences are minimal and so you can’t make mistakes. You have to do everything right if not you go from first to fourth.'