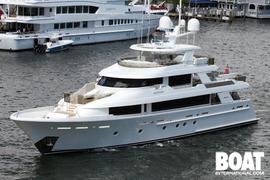 Recently spotted on the USA's East coast - another hull from the successful Westport 130 series delivered few months ago following her launch in December 2010. Previously known under the hull number 4005, this yacht is now christened Gene Machine.

This 39.62m composite trideck is one of the successful composite series with no less than 33 hulls built, including five builds coming from the restyled version since 2009. She has naval architecture by William Garden, exterior styling by Taylor Olson and an interior by the in-house team. The standard layout accommodates 10 guests in a master suite on the main deck and four double cabins on the lower deck. She is powered by twin 2,735hp MTU diesels that provide a top speed of 24 knots and a cruising speed of 20 knots.

The next superyacht in this series, hull 4006, is also scheduled for delivery later this year.