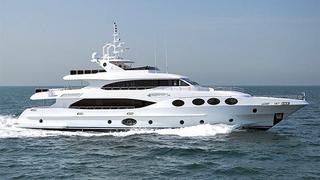 The third 38.4m Majesty 125 motor yacht was rolled out from her shed, ready to be launched imminently.

In its standard version, the Majesty 125 motor yacht accommodates 10 guests in a full-beam master on the main deck and four double cabins on the lower deck. Built in composite, her semi-displacement hull is powered by twin 2,400hp MTU engines giving a top speed of 23 knots and a range of 2,000 nautical miles at 12 knots.

The third Majesty 125 motor yacht is easily distinguishable from her sister ships thanks to her full-white paint job. She is scheduled to make her debut at the upcoming Dubai Boat Show in March.