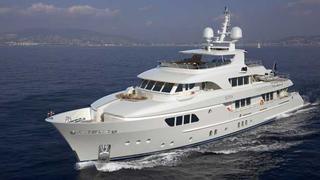 Moonen's custom 42m motor yacht Sofia, which is the largest yacht to be built by the Dutch yard, recently got a bit longer when her stern swim platform was extended to take a larger submarine than was originally planned. She will be the first luxury motor yacht of this size to carry a three-person sub.

A triple deck, long-range, semi-explorer type motor yacht, Sofia has been designed by René van der Velden Design, with naval architecture by Stolk Marimecs. Her owner has been closely involved in developing a number of her custom features.

Capable of reaching depths of 100m, the U-boatworx submarine will begin sea trials in Malta soon, while in the Netherlands the dedicated launch crane is being pre-assembled and tested before final installation on board the yacht's swim platform, which will also serve as a docking bay for the tenders.

Art-Line is responsible for the bright and open interior, which features an atrium with a custom piece of Concetto art, made and supplied by Ceaser Stone in Israel. Ten guests will be accommodated in the layout, which has a full-beam master cabin on the main deck and two queen-sized cabins and two double or twin guest cabins on the lower deck. Crew quarters for seven are also located on the lower deck.

Work-in-progress images of the owner's and guest suites show a contemporary style with extensive use of natural materials - oak and zebrano wood feature along with fabric panels and rattan.

The yacht's professional galley is currently being installed on the main deck in close proximity to the saloon and dining area, while the bridge deck features an open-air deck lounge and gym aft of the bridge. The bridge itself has an upgraded dashboard with an integrated foil bridge, implemented in cooperation with Tijssen Elektro. Topping it all off is a sun deck complete with bar and spa pool.

Fitted throughout with LED lighting, Sofia will also have a state-of-the-art entertainment system featuring a full Kaleidescape video server with Samsung Smart LED televisions and multi-room control (including lighting, blinds and climate control) via i-Pad.

Sofia is one of three major builds currently under construction at Moonen, the others being a Moonen 100 explorer and a Moonen 82 Alu fast displacement vessel. She is scheduled for delivery in autumn 2012.