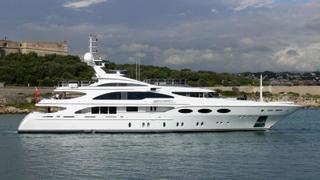 The 52 metre Benetti yacht My Falcon has emerged from its major refit at Turkish yard Bilgin and completed its transformation into a fully fledged "party yacht".

The sun deck has been transformed into an area to entertain family and friends. The deck has been divided into three large areas featuring a large forward sundeck kitted out with tables, backrests, bar and BBQ. It also features new tables that can be raised and lowered depending on an event's requirements.

The old Jacuzzi has also been replaced with one surrounded by glass walls while all systems have been upgraded. A day head has also been fitted in close proximity to the Jacuzzi.

The owner opted to upgrade the seating areas with glowing fabric to "enliven the atmosphere during night". The bar area has also been rebuilt with more lighting while speakers, lasers, steam units and a DJ cabin have been added to transform the sun deck into a private night club.

Inside, the colours have also been completely changed in the main and upper decks, with the owner opting for an ebony colour scheme.

The layout of the upper deck has also been rearranged to accommodate a new bar area while decorative panels, mirrors and glass all feature in the new interior design scheme. The main saloon, meanwhile, remains largely untouched save for more colourful upholstery on all seating.

Current accommodation is for 12 guests in six cabins each of which will benefit from My Falcon’s new design scheme.

On the technical side, the automation system, hydraulic mechanism, fire detection system, main switchboard, exhaust discharge and circulating pump all received upgrades. My Falcon continues to be powered by two 1,850hp Caterpillar diesel engines giving her a top speed of 16 knots.

The new and improved My Falcon was delivered to her Kuwaiti owner in time for the summer season.