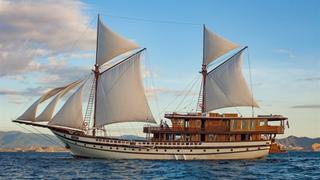 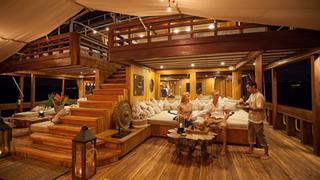 The yacht has completed her maiden voyage from the Indonesian island of Bali to Labuan Bajo on the island of Flores.

She is now available for charter through Yacht Sourcing in Indonesia’s eastern destinations, including Komodo National Park, the Banda Islands and Raja Ampat.

Prana took 21 months to build and is based on a traditional yacht design which typically measures between 18 and 50 metres in length.

The design is characterised by two masts, which accommodate a maximum of seven sails of varying sizes. It is inspired by the traditions of the seafaring Bugis tribe.

Prana has a top speed of 11 knots and is equipped with nine spacious en suite cabins over four decks and also includes a yoga terrace, numerous indoor and outdoor living and dining spaces and a spa. She also features a watersports platform and al fresco cinema.