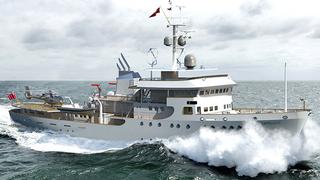 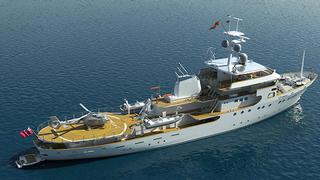 ER Yacht Design has revealed the redesign of 59 metre classic superyacht Capella C for a London based client. The design company, founded by renowned yacht designer Ivan Erdevicki, has come up with a design that will turn the 60's classic yacht into a functional explorer yacht capable of cruising to the remotest parts of the world.

Capella C was originally built in 1968 as a pilot vessel by the Scheepsbouwwerf Gebroeders Pot yard in the Netherlands. In 1985 she was converted into a luxury yacht and in 2008 underwent a refit. This latest design marks another change for Capella C.

ER Yacht Design have retained the original classic shape of the steel hull but redesigned the shape of the steel superstructure to increase the size of the accommodation. The integrated design also features a new full size helicopter deck – an integral feature of any explorer yacht.

The well-considered design of the exterior decks also allows space for two 8 metre tenders. There is an observation area on the fly-bridge while the rest of the outside space leaves options for entertaining, dining or relaxing.

“The primary objective was to modernise the classic yacht and enhance the existing beautiful lines so that the new expedition yacht looks most graceful and recognisable in any marina or anchorage,” comments ER Yacht Design. “The new form enhances the hull’s classic shear-line and achieves an attractive look that will never be outdated.”