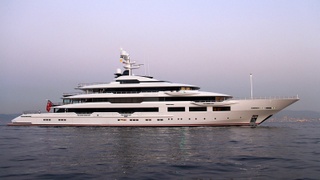 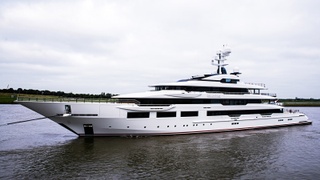 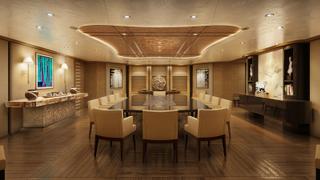 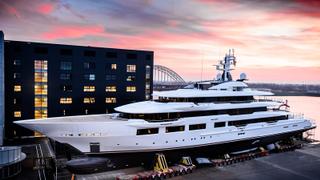 Oceanco's 90 metre superyacht DreAMBoat has been captured underway on her maiden voyage to Gibraltar.

It comes after the 90 metre, 2950GT yacht was delivered to her owners earlier this month after completing sea trials. The yacht's launch took place in February. The yard previously revealed that the owner will spend the summer season cruising DreAMBoat with his children, grandchildren and friends.

Built from a steel hull and aluminium superstructure, DreAMBoat's exterior profile features overhangs from the superstructure and cut outs from the bulwarks which create a "classic and strong appearance."

Speaking about the design, Øino said: "At the outset the exterior design was intended to be understated and timeless. Working closely with Oceanco all the primary surfaces and details were created keeping this in mind. The result is one I think we all can identify with."

Disdale meanwhile revealed that he was asked to work on the project after completing the interior of the 85.5 metre Oceanco yacht Sunrays.

“Our interior design features many exotic finishes creating a harmonious and calm environment including surprise details to entertain the eye."

He added that he and his team had avoided the "big wow factor that soon becomes boring".

"We believe that DreAMBoat with her quietly sophisticated interior is indeed a future classic," he said.

Key features on board DreAMBoat include a swimming pool on the main aft deck and a spacious sundeck with a Jacuzzi and outdoor cinema. A second Jacuzzi sits on the owner’s private deck. A full carbon canopy mast house and mast are also key parts of the design. A spa sits on the bridge deck aft with a custom-built hydro massage bath.

Accommodation is for a total of 23 guests and 33 crew in a massive 2,950GT interior.

The propulsion package consists of a pair of MTU 4828 engines while the yacht’s beam measures 14.2 metres.

The project marks Oceanco’s 33rd yacht in its 33 year history and follows fellow 90 metre DAR, which made her debut at the 2018 Monaco Yacht Show.

The boat is one of several enormous superyacht projects in the works at Oceanco, including 109 metre Y720 and 125 metre Y721, both due in 2021. The 117 metre Y719, also known as Project Acquaintance, is due next year. The average length of all 34 yachts the yard has delivered since 1993 is a massive 73.1 metres. Øino is no stranger to super-sized projects either, with more boats than any other designer among the Top 101 yachts in the world.