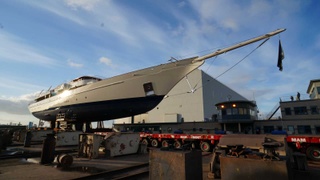 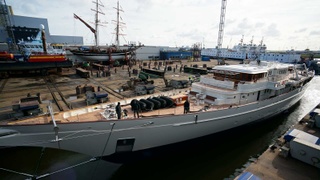 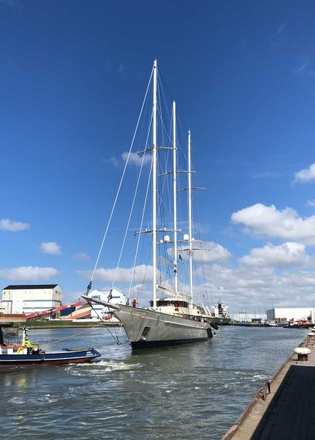 The 90 metre three-masted Athena has been relaunched after her extensive refit at Royal Huisman.

The schooner went in to the yard’s deep seawater facility in the Netherlands last autumn, along with 93 metre Eos.

She underwent her Lloyd’s 15-year survey, an overhaul of her main engines and gensets and a full rigging service, as well as a hull, superstructure and rig respray. She gleamed in the sunlight when she emerged earlier this week.

Athena underwent an overhaul of her main engines and gensets and a full rigging service, as well as a full respray. Photography by Team Huisfit

Various onboard systems and piping were updated, and the teak on her main and bridge decks was replaced.

Athena was designed by Dykstra Naval Architects and Pieter Beeldsnijder and built by Royal Huisman in 2004. She can accommodate 10 guests in five cabins, plus a crew of 20, and cruises at 14 to 18 knots.

Lürssen-built schooner Eos was relaunched in March after her own refit at Huisman.