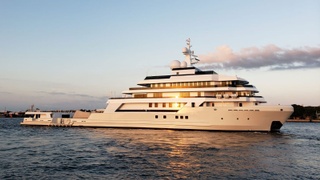 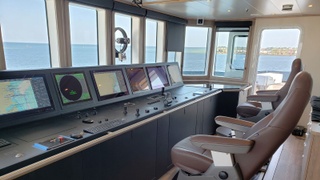 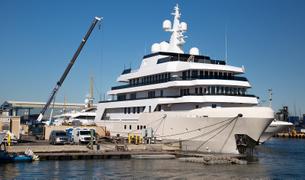 The 90 metre explorer Voyager has finally completed its conversion after three years in construction.

Previously known as Danah Voyager, the yacht arrived at Dania Cut, Florida in April 2016 to begin a three year conversion from a supply ship into an explorer superyacht. She now ranks as the largest superyacht conversion ever in the USA.

Originally built by US yard Swiftships and launched in 1997 as Candy Trader, her initial LOA was 63 metres when she first operated as a supply ship for commercial works. She was re-named HOS Trader in July 2003, when she was used as an offshore supply ship.

The first part of her conversion began in January 2015. This work included a redesign of her superstructure and lengthening of her hull, as well as a 12.12 metre mid-body extension. She now measures 91.4 metres. Other major steel work was also completed, when a larger bathing platform and helipad were added to the vessel. The work was undertaken by Gulf Islands Shipyards in Houma, Louisiana.

The hull of Voyager was then shipped to Fort Lauderdale, where fitting out was completed at Dania Cut. This included repowering and the installation of new generators.

The interiors were believed to be split between two separate contractors, with one working on the guest cabins and another dedicated to the crew quarters. The five-deck explorer has the capacity to house up to 70 crew.

Other key features include multiple galleys, pantries and media rooms, as well as a deep dive centre — one of the primary purposes of this explorer yacht.

At the bridge, a customised console designed by VMAG and manufactured by Radio Zeeland is fitted with touch screen technology, while multiple screens have glass insert panels, not just for improved aesthetics, but to enhance viewing angles and display readability. There is also a glass-touch switch that is integrated to several external components, such as tracking, radar, security cameras, fuel usage, bilge, for additional monitoring and control.

The conversion was project managed by Voyager Maritime Alliance Group (VMAG) - the largest project in their 30-year history. Kirilloff and Associates was involved in the concept stages of the project. Rafael Ochoa provided the exterior styling in consultation with the owners and Kirilloff.

David Leone, President of VMAG said, "Very little was left untouched throughout the vessel, so it was crucial to manage each section of the refit, in the right order, to avoid any delays and additional costs. With our team of technical engineers, I knew we could accomplish this particularly complex project

"I am particularly proud to create the first ever entire superyacht vessel integration" he added. "This means that anywhere on the vessel there are access points that can monitor any type of activity, i.e. navigation, security, radar, engines, generators, power distribution, fuel, water etc., to enable the captain to have complete control of the vessel, whether he is at the helm, in the sun lounge or in his cabin."