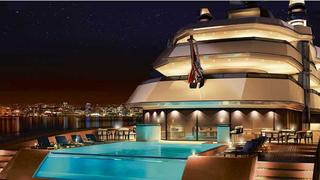 A superyacht of Leviathan proportions

Oceanco currently holds the record for the largest yacht to come from a Dutch yard, with the 95m Indian Empress _(ex-Al Mirqab)_, but this achievement might be topped by a new design for the yard by Nuvolari Lenard.

The Italian design team was called upon to develop the platform and exterior styling of a 120m superyacht. After more than a year of extensive engineering, the yard is preparing to propose the project to the market.

Oceanco and Nuvolari Lenard have previously collaborated on four yachts including the 81.2m Alfa Nero and 85.5m Seven Seas – the iconic Oceanco infinity pool was introduced on the former. Distinctive features of the current design include two side chimneys, VIP cabin balconies, an expansive aft deck 150 square metres of beach club and twin glass elevators that connect the lower deck with the owners’ private upper deck.

The powerful lines of the 120m design – among the largest from Nuvolari Lenard at 1,800 GRT – were inspired by military ships. The design team say close attention was paid to the balance between the hull length as well as volume and position of the superstructure to create a unique silhouette.