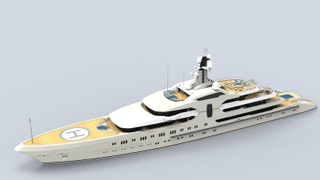 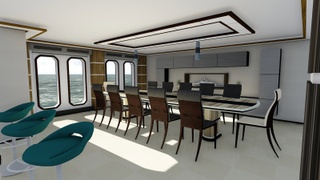 Built from a steel hull and aluminium superstructure, the superyacht has a beam of 18 metres and displays “smooth and pleasant” exterior lines, according to Senol.

Key features on board the yacht include a nine-metre swimming pool and large sunbathing area with a large lower deck beach club, complete with a bar. A helipad sits forward on the bow, which also includes a Jacuzzi surrounded by sunbeds. The aft upper deck is the main al fresco entertaining area, and features a second Jacuzzi and plentiful outdoor seating.

Inside, the focus has been on creating large volumes and spacious living areas. Accommodation is for a total of 22 guests in 12 cabins. Eight guest cabins sit on the main deck alongside a cinema, saloon and two lounges. The master cabin meanwhile sits forward of the upper deck and includes a private lounge, ensuite bathroom and private access to the helipad. Two other guest cabins also sit on the upper deck, alongside a dining area and another saloon. The crew quarters meanwhile allow for a staff of 32.

Elsewhere, the large central spiral staircase leads to the large main deck saloon aft and skylounge, which joins to the formal dining area amidships. The rooms forward can be adapted by the owner to be used as a series of entertainment and relaxation rooms such as a cinema, gym, massage room or library.

Power is set to come from a pair of MTU 5842HP engines for a top speed of 20 knots and cruising speed of 15 knots.