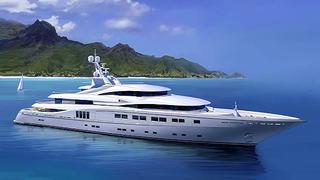 So far, there's been little information about the impressive 82.3 metre superyacht currently under construction at Abeking & Rasmussen but now Burgess bring more news.

Burgess who placed the build order, has announced that this closely guarded ‘secret’ was commissioned for experienced owners and delivery is slated for May 2013. Exterior design is by Sam Sorgiovanni and an elegant interior has been conceived by Jim Harris, the long-time designer of the owners, who was also responsible for the much lauded interior of their previous yacht, a 61.2m Feadship named Secret (now renamed Majestic). Captain Andrew Lawrence has served as build captain and owners’ representative since inception of the project.