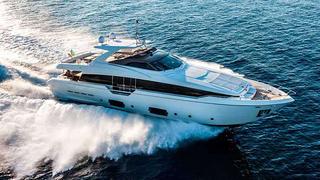 Good news from the Cannes Boat Show as ABYS Yachting's Jean-Marie Ambrosino, in collaboration with their team from Antibes, has sold a new Ferretti 960 during the show.

Making its world premiere at the Festival de la Plaisance de Cannes this week, the Ferretti 960 is the successor to the Ferretti 881. A collaboration between Studio Zuccon International Project, Advanced Yacht Technology and the Centro Stile Ferretti Group, the 960 has a sporty design and an LOA of 29.2 metres, but her hull length will be only 23.98m, allowing her to be driven without a professional captain if so desired.

The 960 is the first Ferretti to have five large guest cabins - four equal-sized double staterooms on lower deck, and a master suite on the main deck. Crew quarters are forward, with three cabins for five crew members. In its standard version, the Ferretti 960 is powered by twin MTU 16V 2000 M84 engines giving a top speed of 27.5 knots and a cruising speed of 24 knots, with a range of 340 nautical miles.