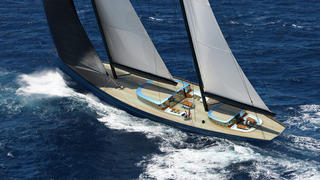 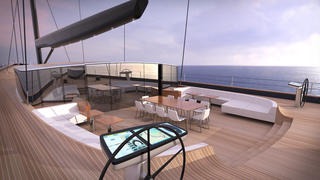 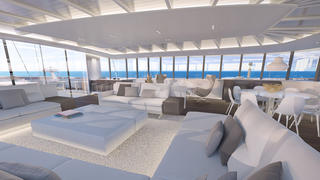 Developed in collaboration with Dykstra Naval Architects, this elegant ketch design was created in response to a specific client request.

The brief was to balance speed and comfort, tradition and innovation, as Voorhees explained: “This 70 metre sailing ketch has been developed in response to client interest for an extremely comfortable and extraordinarily fast yacht that respects the heritage and timelessness of the gilded age yet refuses to be tied to tradition.”

One of the most striking features is pair of sleek glass deckhouses, with curved teak surrounding them, to give the impression that they have pushed up through the deck.

Interiors feature focal pieces of furniture and art, which are meant to contrast with the formal and traditional setting of a sailing yacht.

The owner’s cabin comes with its own private lounge and cockpit, while tender storage would include an 8.5 metre owner’s tender and a 6.5 metre working tender.

Other key features on the Voorhees 70 metre concept include a beach club and boarding lobby with easy access to both owner and guest suites. Extensive crew accommodation is split across seven cabins.

Voorhees has also placed a strong emphasis on modern technology, with plans for advanced materials and construction methods to ensure maximum weight savings and optimised performance.

Winner of the 2010 Young Designer of the Year Award, Adam Voorhees is also currently working on a Hollywood-inspired 100 metre superyacht concept and an extended version of the 25 metre Bruce Farr sailing yacht.