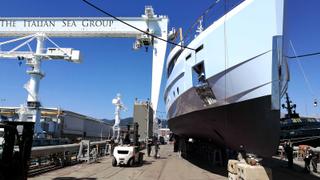 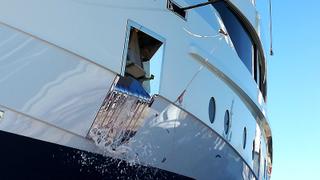 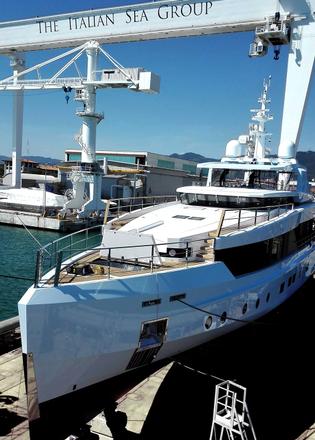 The Italian Sea Group has announced that the fourth hull in its Admiral Impero series has been launched in Marina di Carrara and named Sage.

This 40 metre all-aluminium yacht follows on from Giraud, Nono and Tremenda with a modern, masculine aesthetic, characterised by a sharp-contoured superstructure that delivers a notably large amount of internal volume for her length.

Exterior styling is courtesy of Luca Dini, while the Admiral Centro Stile team worked with Gian Marco Campanino to create an interior décor that is described as “elegant and sophisticated”. Panoramic windows ensure that the open-plan saloon and dining area is full of natural light.

Accommodation is for 12 guests split between five staterooms including a main-deck owner’s cabin, two doubles and two twins with pullman berths, while the crew quarters allows for a staff of up to seven people. Key features include a superyacht beach club at the stern, situated just aft of a side-loading tender garage — a rarity for yachts of this size.

Take a closer look at the Admiral Impero 40 yacht Sage

Power comes from a pair of 1,925hp diesel engines that allow for a top speed in excess of 20 knots. When trimmed back to her cruising speed, Sage should boast an impressive cruising range thanks to her total fuel capacity of 34,000 litres. The yard adds that her 1.95 metre draught should allow for effortless cruising in shallow waters.

Other superyacht projects currently under development at the Italian Sea Group include the Admiral 63 and the Momentum 50 Explorer, both of which are due to hit the water in 2019.