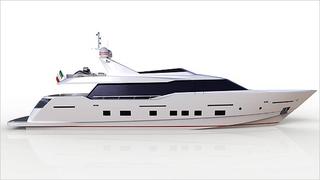 It's been a healthy year so far for Admiral Tecnomar Group, which has just announced another new order for a yacht from its successful Nadara 30 series, only weeks after the order of a new 38m motor yacht.

This 30m motor yacht is entirely designed by in-house architects and designers, and thanks to a 7.20m beam has a large interior volume for its size. Accommodating up to 10 guests, the Nadara 30 has two versions for the layout - one with four cabins and one with five, all located on the lower deck including a full-beam master suite.