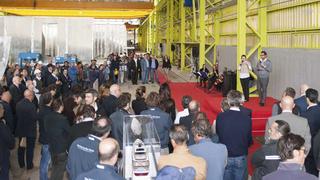 The yachts in build are part of Admiral's aluminium full-displacement E Motion Series, designed by Dobroserdov Design in cooperation with the Admiral in-house Centro Stile. The delivery of both yachts has been scheduled for summer 2016.

Both the yachts will feature a hybrid propulsion system, which will also deliver a trans-Atlantic range, as well as a touch-and-go helipads located forward on the main deck.

As the ancient seafaring tradition demands, a golden pound, which was given to each owner by the yard during the ceremony as a good luck token, has been welded into the keel of both superyachts.