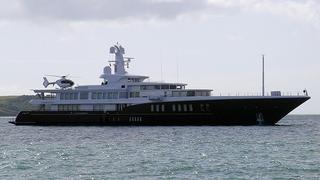 Air apparent: the 81m superyacht is delivered and arrives in the Med

Recently spotted anchored off Falmouth, UK, awaiting her helicopter, Air, which was launched in March, has been delivered and was at that point en route from her yard in the Netherlands to the Mediterranean. Yesterday she was anchored off Saint-Tropez and today is heading for Sanremo, Italy.

Although 81 metre Air is slightly smaller than the vessel she replaces – 90.1 metre Air, now Ice, launched by Lürssen in 2005 – she retains the look and returned her owner to the yard that built his previous vessels, Feadship-De Vries.

'I couldn’t build his last boat at the Aalsmeer yard,' Henk de Vries told us recently, 'it was too large. When he sold that boat, we began working on ideas for the next one.'

Air, with standard propulsion, achieves similar efficiencies as her diesel-electric predecessor via a slender, low hull, and small, low-drag stabilisers that expand on demand for zero-speed mode.

The owner-mandated fully certified helideck is a Feadship first, as is the hull’s matte-black paint, which forms a nice envelope for Rémi Tessier’s zen-like interior.