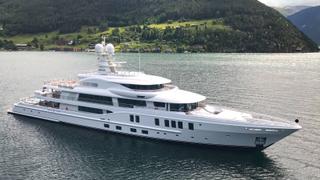 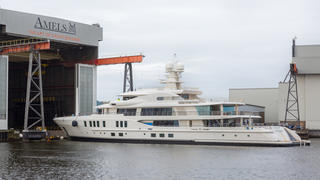 Dutch yard Amels has opened up about its latest 74 metre superyacht New Secret, which has lived up to her name until now.

Sold in September 2015 by Fraser Yachts, she was delivered in May as the second Amels Limited Editions 242 yacht with all details kept under wraps, but less than a month before her Monaco Yacht Show debut, the veil of secrecy has been partially lifted.

As with hull number one Plvs Vltra, the exterior lines come from the drawing board of renowned British designer Tim Heywood, but New Secret differs from her sistership in having a completely white superstructure.

Moving inside and her interior styling was created by Winch Design on the owner's request. The yard describes her décor as having “a sophisticated and modern style”.

Rose Damen, commercial director at Amels, said: "The interior’s contrast with the first Amels 242 couldn’t be greater. It really shows the extent of customisation possible through the involvement of the owners. The exterior has a warm and tastefully discreet colour scheme, but there are also some significant customisations such as the extended eight-metre swimming pool on the main deck and the larger helipad on bridge deck.”

Unlike many of the yachts at the Monaco show, New Secret is not offered for sale or charter and on-board visits will be limited to VIPs only.

Built from a steel hull and aluminium superstructure to Lloyd's Class standards, New Secret is expected to be used for world cruising and features large exterior aft decks.

The layout of the master suite was of particular importance to the owner, along with the superyacht spa area. Five more guest cabins will provide total accommodation for up to 12 guests.

With a total fuel capacity of 155,000 litres, this four-deck yacht will boast a maximum cruising range of 5,000 nautical miles at 12.5 knots.

Other superyacht projects currently under development at the Dutch yard include two further Limited Editions 242 yachts and the first Amels 188 Limited Editions yacht, which is due for completion next year.