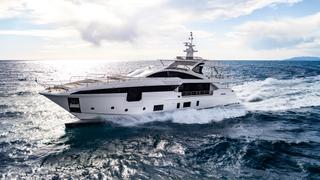 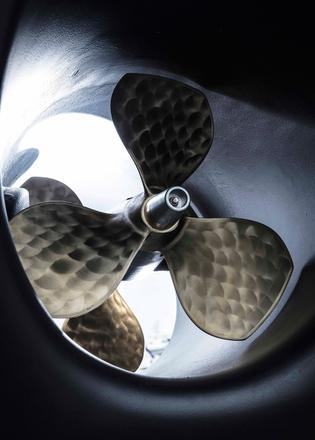 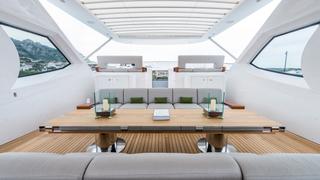 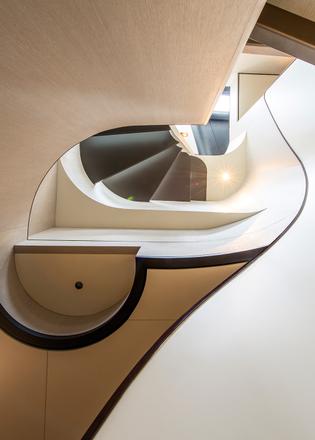 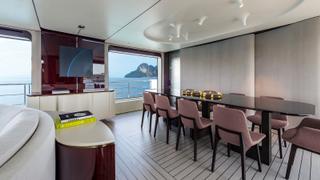 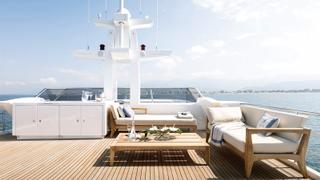 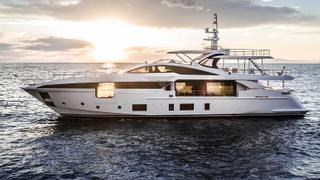 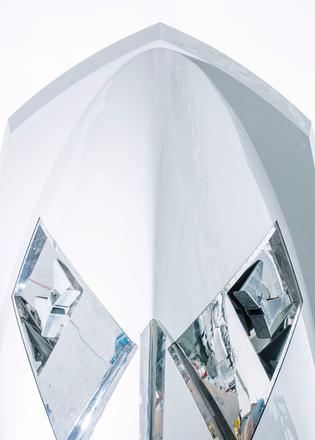 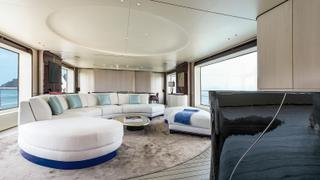 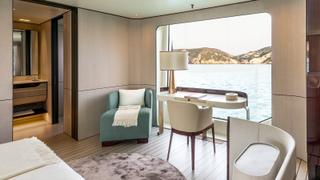 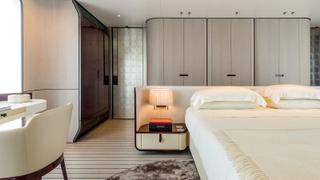 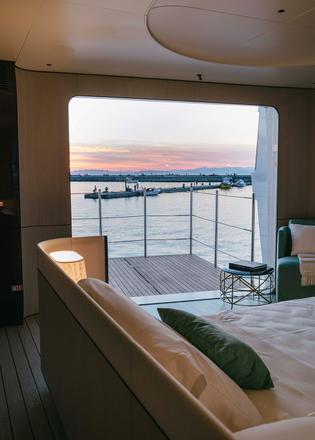 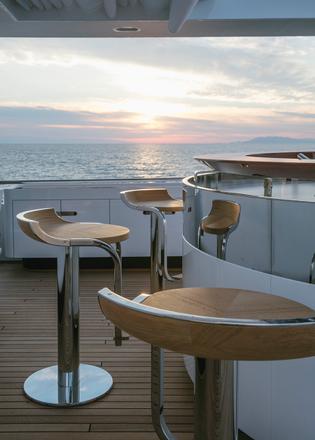 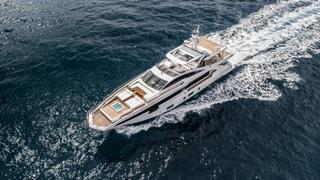 Azimut has a tagline it likes to use when describing its new Grande 35 Metri: “No half measures”. There can’t be — the territory the yard has entered with its flagship yacht is not short on competition. Princess and Sunseeker have significant roots in the 34 to 36 metre market. Sanlorenzo sits pretty comfortably in that space with its SL118. There are options from Turkey, Taiwan and the UAE. There’s more local competition from smaller yards like DL Yachts, while Westport over in the US keeps pumping out its hugely successful 112s. With a range of options (and prices) this wide, Azimut’s job was to bring something new to the party; to lay down a marker.

The two people it tasked with doing this were long-time collaborator Stefano Righini for exterior styling and Achille Salvagni, who crafted the interior. You’ve heard of Righini — he’s a legend, responsible for the designs of hundreds of yachts from the likes of Azimut, Benetti and Overmarine. Few people have had more influence on modern motor yacht design. If you’ve heard of Salvagni, it’s probably because you know his range of exquisite furniture sold at his atelier in London, or at Maison Gerard in New York. But take note of his name: he’s a growing force in superyacht design, working not only with the Azimut-Benetti group but also with Rossinavi on two of its 2017 launches: Endeavour II and Aurora.

The pair faced very different challenges on this project. Righini’s was to take a wide body platform, with vast volumes (for a 35 metre) and make the Grande 35 Metri look low-slung and trim. In short, take a fat boat and put it on a stylistic diet. His long overhangs, huge dark areas of glazing and sloping wheelhouse window lines all distract from the fact that there’s a whole lot of boat here.

Take a closer look at the Azimut Grande 35 Metri

“The search for volume is a constant demand,” says Giovanna Vitelli, vice-president of Azimut-Benetti. “And this is our response, keeping the sleek lines. But we have to provide internal space because that is what the market requires.” Salvagni therefore had plenty of space to work with but he had to come up with a range of interiors for this semi-custom yacht that would suit all markets, from karaoke rooms for Asian clients to open kitchens for US ones.

On this first hull, “we wanted to be sophisticated, simple, contemporary and timeless at the same time”, says the designer. “The design philosophy was based on softness. To last, an interior can’t be aggressive, but it still needs its own personality. It’s very soft, very calm and relaxed. If it keeps that feeling, it will last.”

He deliberately departed from the yacht’s exterior style in conceiving the interior. “The yacht is so aggressive from the outside and I wanted to transmit the opposite sensation inside. The tension between the two opposites created a balance.” Salvagni’s expert eye has extended to the finish, which is very good indeed, with lots of curving, hard-to-fit detailing. Azimut even had to bring in some new expertise for this particular fit-out, according to the designer. “Some changes had to be made to deliver a yacht of this complexity and quality.”

At the interior’s heart is a circular seating area in the main saloon, which takes full advantage of the views offered by the huge windows on either beam. Getting such large panes of glass installed proved a strengthening challenge, admits Vitelli, but one the yard rose to. “If you think those are big, wait till you see the master cabin,” she teases.

It’s becoming almost trite to exclaim at the size of windows on superyachts, since each new hull seems to present an ever more outrageous use of glass, but when they’re this big, on a yacht this size, it’s still worth saying: they are massive. And hugely impressive, pouring plenty of sharp Sardinian light into the already bright saloon. “I am obsessed by light,” Salvagni says.

Vitelli isn’t lying about the windows in the Grande 35 Metri’s main deck master cabin. They’re almost full-height and align perfectly with the bed, which Salvagni moved off the rear bulkhead to place in the middle of the room. “I keep fighting with the shipyard to keep this layout,” he says. “The connection between the bed, the view and being in the centre... you feel like a king.”

The port window has one more trick: it opens, dropping down to form a superyacht balcony — “the largest in this sector of the market”, according to Vitelli. Integral handrails in the balcony pop up, so using it is a simple, crewless operation. It adds to the floor space available, which is already ample.

A useful indicator of how much room the owners have is the fact we’re in the master cabin with perhaps 25 other people, all visitors to Azimut-Benetti’s Yachting Gala in Porto Cervo, yet no one is knocking shoulders. One of the ways Righini has managed to engineer all this volume is by designing that unusual blunt forepeak, which has allowed him to carry more hull forward and lay more deck on the bow. It’s a neat solution if you can get over how it looks, which, in the context of the Grande 35 Metri’s angles, isn’t bad.

All exterior spaces have benefitted. The foredeck seating and modest superyacht spa pool are a premier lounging space rather than an afterthought and the flybridge seems to stretch forever. “It’s the premier flybridge in the world in many senses,” says Paolo Vitelli, president and founder of Azimut-Benetti. It is a vast 70 square metre platform, made to feel bigger because all the furniture floats. “I hate to build anything against the walls, because it creates an empty space in the centre and it impacts the view,” says Salvagni.

Azimut has even squeezed in a superyacht beach club, a first for a yacht of this size. It’s not extensive, with just a bar and platform, but it will be a strong feature on charter brochures. The tender and toys sit across the lower deck ahead of this space and then you get to the engine room. This first hull is fitted with twin 2,400hp MTUs, and they give a maximum speed of 25.5 knots and a fast cruise of 21.

Azimut has used its extensive skills in carbon fibre to keep weight down — the entire superstructure is constructed with the material, for example. This adds cost, obviously, with carbon fibre coming in around 30 per cent more expensive than standard GRP, but Paolo Vitelli counters by saying this boat is around 26 per cent more efficient than the old 35 metre Azimut 116.

“And the 116 was already a good boat,” he says. “So with the combination of the special hull with its wave piercer, carbon fibre and optimisation of everything, it’s quite a good result.” The Grande 35 Metri sits on traditional shafts and comes with both fin and gyro stabilisation. Sadly I’m not able to put either to the test as the yacht is on exhibition duty and tied firmly to the dock.

We head out instead in the yacht’s little brother, the Azimut Grande 27 Metri, and all is serene as we blast around in the short chop off Porto Cervo, suggesting good things for the performance of big bro. The market clearly thinks so too — Azimut has sold six Grande 35 Metris off plan, each with a starting price of around €12.5million. In among all that competition, the yacht has successfully found its place.

First publish in the September 2017 edition of Boat International