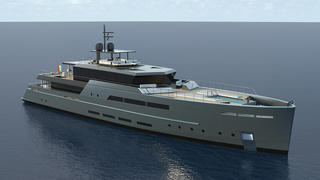 Part of the Baglietto V-Line series, this new design follows on from the 41 metre concept that the yard and the studio revealed together at the 2016 Fort Lauderdale Boat Show.

The sharp exterior lines draw on Baglietto’s strong track record in building military vessels. Key features include a six-metre superyacht spa pool situated on the foredeck, an al fresco dining area with seating for up to 20 guests and a sprawling sundeck that boasts 360 degree views out to sea. Back aft, the beach club area comprises a superyacht spa and gymnasium, with direct access to the sea via a swimming platform.

Moving inside and Santa Maria Magnolfi has created a spacious main deck saloon, measuring 90 metres square. Sliding panels allow the dining area to be sectioned off, creating a private meeting space when needed. The owner’s suite is situated on the main deck and boasts its own superyacht office as well as a fold-out balcony.

Power would come from a pair of Caterpillar 3512B HD DITA-SCAC engines for a top speed of 16 knots with comfortable cruising at 12 knots. Tender storage is split between an aft garage, with room for the main 7.5 metre tender, and the foredeck, which can house a Jet Ski and several superyacht water toys.