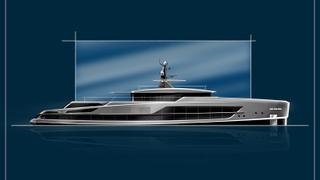 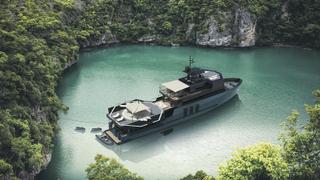 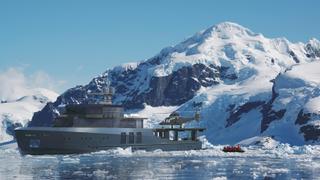 Italian yard Baglietto has unveiled two new concepts at the2018 Monaco Yacht Show – a 65 metre addition to the V-Line and a 43 metre Explorer.

The 63 metre V-Line has been designed by Francesco Paszkowski Design and will sport a “slightly retro” look, according to the yard.

Standout features include a float-in stern based garage big enough to accommodate a 10 metre tender. The garage can also be converted into a spacious beach club using two side hatches. A third hatch in the central part of the boat offers additional guest access to cabins.

The main and upper decks will both feature ceiling high windows, while a translucent swimming pool looking down onto an aquarium will sit on the upper deck. The yacht will also feature a touch and go helipad and water toy storage area.

Accommodation will be for 12 guests across six cabins comprising a master cabin, VIP cabin on the main deck and four guest cabins on the lower deck.

There are currently few details about the propulsion options, but the yard has revealed that several are being developed, including a hybrid option.

The second concept, the 43 metre Baglietto Explorer features a design by Santa Maria Magnolfi, which focuses on seaworthiness, comfort and safety.

The interiors will feature large glazed surfaces, creating a space flooded with natural light and will also be decorated with a series of objects originating from “faraway countries”. The yard likened the space to a “captain’s logbook”.

Interior materials will include Italian marbles and exotic woods which will contrast with Moroccan straw mats and Indian silk fabrics.

The yacht will feature a 58 square metre private owner’s deck equipped with a dining and sunbathing area. The yacht’s winter garden, which can be used as a TV room or saloon, sits between the aft area and full beam saloon. The sundeck will be furnished with sofas and sunpads and also features a bridge house, which can be used by guests as a wildlife observation point.

A helipad sits above the stern located garage which has room for a 6.8 metre tender and several Jet Skis. An additional 3.7 metre tender can also be stored forward.