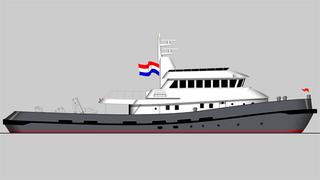 The Balk Shipyard in Holland has contracted to convert a 36.4 metre ice-classed ocean-going tug into a luxury expedition yacht designed by Felix Buytendijk. The new superyacht will have a single 1500hp Caterpillar engine giving a range of 3,500 nautical miles with a cruising speed of 10 knots.

The no-nonsense but comfortable cabins will accommodate eight passengers and five crew and work on the hull and superstructure will be completed in early 2011, with delivery expected in late 2011. Her maiden voyage in Spring 2012 will be from Spitsbergen to Novaya Zemlya in the Arctic.