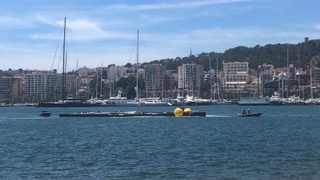 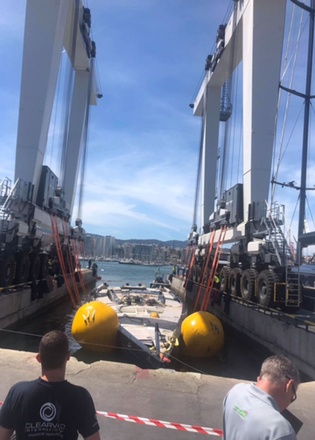 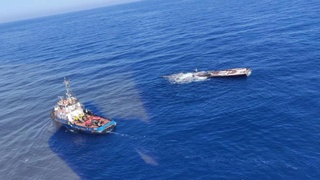 The Baltic 130 Custom sailing yacht My Song cannot be saved, according to its owner.

The yacht, which was lost at sea after falling from a cargo ship, was hauled out in Palma earlier this month. Photographs taken by onlookers showed extensive damage to the yacht, with several holes in the hull of the boat.

Now, owner Pier Luigi Loro Piana has confirmed himself that the yacht is beyond repair.

His spokesman told The Times newspaper: "The damage outside and to the interiors of the yacht mean it is not salvable. It may have hit the side of the cargo ship as it fell."

Pier Luigi Loro Piana also spoke out about the incident directly to the Italian newspaper La Repubblica, stating: "For anyone who loves the sea, his boat is like a second home, and it is as if my home has burnt down."

It comes after the 39.6 metre yacht was salvaged from the coast of Menorca by MCS Marine Claim Services Germany. It was then towed into Palma's STP shipyard where it was accessed.

Yacht transport company Peters & May released a statement in response to the incident, in which My Song fell from the 138 metre cargo ship Brattinsborg on Sunday, May 26.

Peters & May chief executive David Holley revealed that the company was informed of the incident at around 4am on May 26th and instructed the captain of Brattinsborg to try and salvage the yacht from the open water.

The cargo ship's crew kept eyes-on contact with My Song until air and sea salvage attempts began. Holley revealed that My Song's cradle had "collapsed", causing the yacht to fall from the cargo ship.

He emphasised that the cradle was "owned and provided by the yacht, warrantied by the yacht for sea transport and assembled by the yacht's crew." This cradling system has now been discharged and is under inspection.

Following the incident, Peters & May instructed Brattinsborg to continue to its original destination of Genoa, where it was due to dock on May 27. It previously departed the island of St John in the Caribbean on May 7.

It is understood the yacht was due to attend the Loro Piana Superyacht Regatta in Porto Cervo. Owned by keen regatta sailor Pier Luigi Loro Piana, My Song won the same regatta last year.

Delivered in 2016, My Song features exterior design by Nauta Design with hull lines by Reichel-Pugh naval architects. The five-cabin interior was also designed by Nauta Design.

The single-masted yacht, which was built from a carbon-fibre sandwich construction, features a plumb bow and wide stern.

"We would not normally comment on cargo incidents but given the high-profile nature of this yacht and the media interest we feel that we need to formally give some clarification. There are several individuals passing judgement on what may or may not have happened and we will attempt to offer some clarity, albeit at an early stage of the investigation. Our reputation is second to none and we will not have it tarnished by unqualified individuals passing judgement without facts in hand. I will add that I am disappointed that confidential photographs were leaked to the media.

The vessel maintained visual contact with MY SONG until the air and sea search was initiated. As of 0900hr BST on 28th May 2019 the salvage attempts are still ongoing. To ensure the safety of the remaining yachts, Peters & May have instructed the carrying vessel to continue her planned voyage to Genoa. No other yachts have been affected by this incident.

A full investigation into the cause of the incident has been launched, however the primary assessment is that the yacht’s cradle (owned and provided by the yacht, warrantied by the yacht for sea transport and assembled by the yacht’s crew) collapsed during the voyage from Palma to Genoa and subsequently resulted in the loss of MY SONG overboard. I will add that this is the initial assessment and is subject to confirmation in due course.

As a leading yacht transporter for the past 40 years we take great pride in what we do and go above and beyond all standard operating procedures to ensure safe transit of all yachts carried by us. We have procedures in place to respond to this kind of incident, although we hope that they are never required.

This incident is more than regrettable, however the transport of yachts on cargo vessels continues to be one of the safest and most cost-effective solutions when carried out by a reputable company such as Peters & May.

More information will be made available in due course but in the meantime, I request that everyone respects the sensitivity of this issue to all parties concerned."