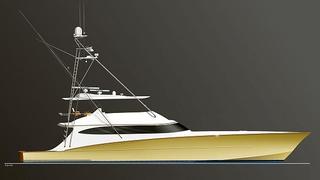 Bayliss Boatworks, the American yard based in North Carolina specialized in custom sportfishing yachts, began the construction of their new flagship in February. This 27.43m motor yacht is currently known under the name Singularis.

Like all the other products of the yard, Singularis (hull B19) is designed by the in-house team and traditionally built in cold-moulded wood. The interior will accommodate 10 passengers in five cabins, including a full-beam master. Powered by twin 2,800hp Caterpillar engines, we can expect a top speed of around 40 knots, and other special features will include Seakeeper Gyro stabilizers and a Brownies Nitrox system for diving.