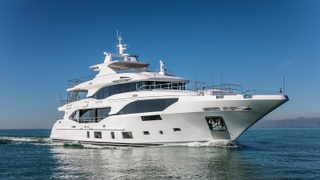 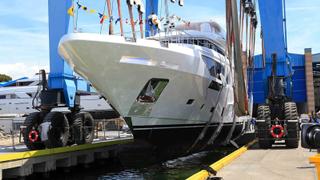 It comes after the 35.5 metre displacement yacht was launched at the yard’s Viareggio shipyard in January.

Constructed from a fibreglass hull and carbon-fibre superstructure, Good Day sports “sinuous and slim lines” by Cassetta, who also handled the exterior design of the first three Mediterraneo 116 yachts.

Good Day’s interior design meanwhile included pivotal involvement from the owner. The result is a décor that features three types of wood, tay, Tanganyika and elm, across the yacht. Marble details and mosaics are also present, specifically in the bathrooms. These include Travertino, Shara Noir and Port Laurent.

Accommodation is for a total of 10 guests across five cabins, including a full beam owner’s suite on the main deck, which features a bathtub and shower bench at the specific request of the owner.

The main deck has been described as "very formal" by the yard and features a 12-seat table for "representation dinners". A large galley includes a modern wok system and high-performance steam oven.

The swimming pool sits on the upper deck, alongside a karaoke area, games cabin and wine cellar. A standout feature on board Good Day is a ventilation system, which allows smoking inside.