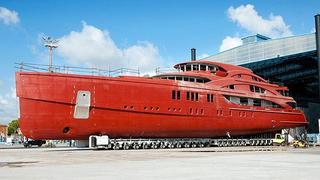 Benetti is certainly in the news this week, as the famous Italian yard gives us a preview of their future 63 metre superyacht hull FB265.

Currently under construction in Livorno, this new giant has a steel hull and an aluminium superstructure. FB265 is designed by the in-house team of the yard, and she's currently the second largest yacht in production at Benetti, after the 90 metre superyacht hull FB262 scheduled for mid 2015.

Accommodation will be over four decks, but there's no news yet of the interior designer. She will be powered by twin Caterpillar engines, giving a top speed of 16.5 knots and a cruising speed of 16 knots.

Moved into her fitting-out shed this week, FB265 will only reappear in early 2014 for her launch.