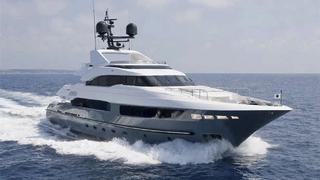 Alex Clarke at Denison Yacht Sales tells me that he is offering a hefty €900,000 reduction on the asking price of superyacht Alexander Two.

Alexander Two is an all-aluminium 41m Mondo Marine designed by Cor D Rover, with interiors by Luca Dini, built in 2009. MCA compliant, and built to ABS class, she sleeps 10 guests in five staterooms, has a crew of seven, and twin 2,251hp MTU engines give her a cruising speed of 17 knots. She has a range of 3,200nm at 12 knots.

She has under 400 hours on her engines and is in 'as-new' condition', having had very little owner use since she was delivered in 2009. Normally lying in Savona, Italy, she will be located at anchor during the Monaco Yacht Show. Alexander Two is asking €9 million.