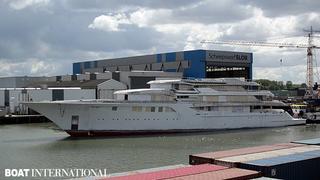 Feadship's hull 1005, in build now at the company's Makkum shipyard, will be the most voluminous superyacht ever built by the Dutch builder.

Feadship superyacht hull 1005 was transfered to Makkum in May 2013, as pictured above. Though 6.5m shorter than the biggest boat ever built by Feadship, Motor Yacht of Year Madame Gu, the new hull 1005, at 92.5 metres, will feature more interior volume than the longer boat.

Boat International was given an exclusive tour of the steel-and-aluminium yacht this week and got a sneak peek of some of her standout features. The pool, not usually the first talking point on a yacht, is epic, 12m long by 4m wide, and is the biggest ever constructed by Feadship. Huge scuppers have been incorporated into the construction, allowing the 1.4m-deep pool to be emptied completely in just three minutes. At the rear of the boat, the pool flows down over a transom partially made of LED glass, so the owner can put on a light show behind the cascading water.

Another neat trick is a dividing wall in the main saloon, which will be entirely interactive, allowing guests to touch on and off different scenes – including a fish tank with fish that respond to your touch. Access to the yacht's six levels is made easier by a glass elevator, whose shaft is topped with more glass, giving guests inside a clear view of the sky. The two-level engineroom houses a pair of 3,000hp MTU 16V4000 lumps and three CAT C18 generators.

With naval architecture and exterior design by Feadship De Voogt Naval Architects and the interior styled by Seymour Diamond, Feadship hull 1005 is slated for delivery in April 2015.