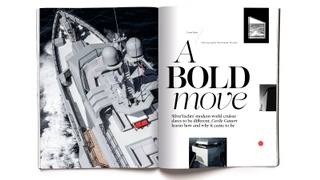 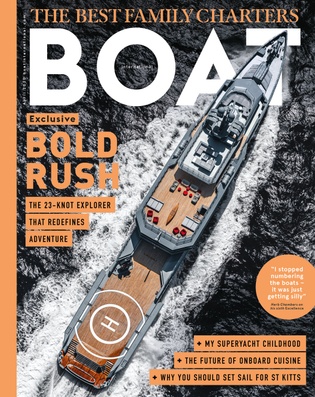 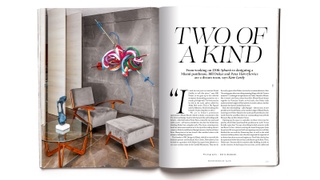 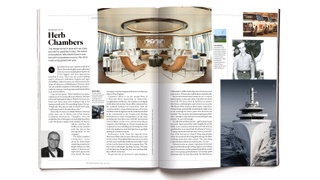 The April Issue of BOAT International is Here

The April issue of BOAT International US Edition is not one to miss. The articles span a wide range of topics from five great new boats from shipyards all around the world to an exceptional penthouse in Miami to family sailing and the finest foods served on yachts. It’s 204 pages of great stories and photos, enough to spend hours daydreaming, planning your next move and helping to pass those extra hours at home.

The cover story is on an unconventional explorer, built in Australia for an experienced owner. We were on board just a few months after her captain took her from Fremantle, Australia, to the French Riviera and got an extended tour from the owner himself. The yacht’s designer, superstar Espen Oeino, suggested a name that fits to a T: Bold. Peek inside and behind the scenes of this 280ft award-winning explorer.

On a smaller scale is Gulf Craft’s Nomad SUV 95, a versatile boat with a top speed of 26 knots and a range of over 1,300 nautical miles at 10 knots. “The Nomad SUV is really designed for family use,” says Gareth Lloyd, a sales manager for the Dubai-based builder.

We also take a spin on the Fairline 33. “The boat is simply great fun to drive,” writer Risa Merl says. “The ride is smooth, and the boat turns on a dime.” And from another British builder, we get aboard one of the first few yachts to come out of Princess Yachts’ new collaboration with Italian design powerhouse Pininfarina. The Y85 shows off some new automotive styling, such as nicely integrated hardtop, and what Pininfarina calls “spatial design”.

Speaking of spatial design, don’t miss a look inside the art-filled penthouse of Bill Duker. He worked closely with the founder of Miami-based PH Design, Peter Hawrylewicz, to create this luxurious pad in the sky. Hwrylevicz and his partner Peter Lieber have worked on 14 projects with Duker, including Sybaris, a 230ft sailing yacht built at Perini Navi.

Photographer Chris Diamond captures the great spirit of the collaboration and the amazing end results. “I wanted to show how beautiful the surroundings were, which was not difficult as almost every room has panoramic views of Miami,” he says.

More design, this time with a California flair, is on display in our Boat Life section where Kelly Wearstler opens up about her background and the style that has earned her an A-list celebrity client list, which she describes as “American, with an inherently Californian, Westcoast aesthetic.”

In Boat Life, journalist Robert Johnson shares his go-to brands for long-haul flights and our Wardrobe Essentials highlights some cool pieces to wear at the Coachella music festival, now rescheduled for October 2020. It may be just what you need to plan your next escape, perhaps to St Kitts & Nevis, featured in Voyage.

The Caribbean, and St. Barths in particular, are favorites of Herb Chambers, the subject of our Owners’ Club profile this month. Chambers had just returned from a few days on board his incredible new Excellence in St. Barths when Executive Editor Cecile Gauert caught up with him at his Boston office. “What surprised me the most about him is that he is, or used to be, a bit shy,” she says. Chambers shares his life story, especially as it relates to his passion for cars and boats.

More owners share all that’s good about boating in our monthly columns Passages from Paradise and some the world’s best yacht chefs reveal a few of their secrets. Dig in!

The April issue of BOAT US is available to order now in our online shop.