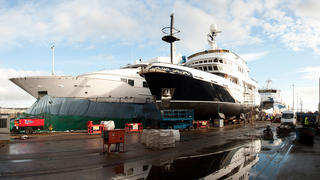 One of Britain’s biggest superyacht refit yards, Burgess Marine has gone into administration, it has been confirmed.

The Dover-based yard appointed BDO as administrators earlier this month (December 13), citing “challenges surrounding the delivery of a major refit project completed in Portchester earlier this year and the payment of the final account”.

The statement adds that a Southampton-based business, believed to be Southampton Marine Services, has stepped in to acquire all of Burgess Marine’s subsidiaries, where business continues as usual.

This move saved 45 jobs, but a further 100 jobs are due to be lost as part of the demise of Burgess Marine, The Daily Echo reports. Speaking to the local news provider, Danny Dartnaill, partner at BDO, said: “Difficult trading conditions and a shortfall in the company’s working capital position – contributed to by a failure to secure the final payment due in regard to a recent major refit project – significantly affected the business and its ongoing viability.”

With eight UK facilities and a ninth in Palma, Mallorca, Burgess Marine was a major player in the superyacht refit market. Recent projects included the classic yacht Lady A and a Mangusta 165 open yacht. News of the business’s collapse comes just 13 months after the yard announced the acquisition of Exeter-based Global Services and its sister company Global New Builds.