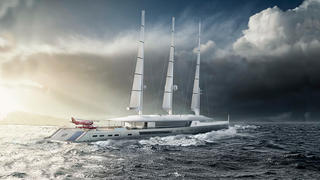 Measuring 80 metres, this design would be capable of voyaging from pole to pole and exploring some of the world’s most remote destinations.

Designer Oliver Stacey explains: “When we were initially looking for a conceptual thread for the design, I had recently seen the Viking Voyagers exhibition at the National Maritime Museum in Falmouth.”

He adds that Norse is inspired by the adventuring spirit of the Vikings and the extensive range and endurance of their longboats.

Just as Viking longboats featured both sailing and oar power, so Norse will be a sail-assisted motor yacht, with a hybrid propulsion system that can take over when the winds drop.

Norse has also been designed with a notably low draught for her size, with a long and robust keel flat that would allow access to shallow bays and remote anchorages.

As befits a globetrotting explorer yacht, Norse would be able to carry a wide range of superyacht tenders and toys, including a seaplane with a wingspan of up to 12 metres.

James Roy, design director at BMT Nigel Gee, concluded: “Despite outward appearances, this is not a sailing yacht; at a time when hybrid is a buzzword in our industry, we couldn’t move away from the unmistakable truth that sail assistance is the ultimate hybrid.”